In Praise Of Small Acts 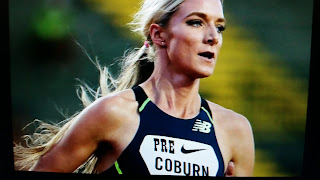 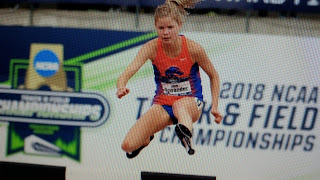 Emma Coburn is widely considered the best female steeplechaser the United States has ever produced. Last weekend at Drake Stadium in Des Moines, she captured her 8th national title to further support this assertion.

Then she did a very small thing.

Coburn was handed an American flag on a tiny stick for a victory lap in celebration of her win and the  right to once again represent the United States as their stepplechase champion in the upcoming World Track and Field Championships in Doha.

Coburn could have kept the flag and posed for a thousand pictures.  Instead she walked over to the 4th place finisher in the race, Allie Ostrander, and handed her the flag.  Ostrander had made her first U.S. team because Coburn receives an automatic bid to Doha as the reigning World Champion. Event organizers, however, had provided flags for only the top 3 finishers in each event.

"I've never been so happy to hold a tiny flag," said Ostrander, the 3-time NCAA Steeplechase champion from Boise State.

In this one shinning moment for sport, there was no longer an aristocracy of achievement, wealth, intellect, or medals.  Power brokers and super-stars.... and you and I.  All of us handed the same two dozen hours a day from which to weave health, happiness, pleasure, respect and our identity.

In a world where we rejoice in Grand Openings and applaud Grand Finales, we need to make more room every day for small acts of kindness.