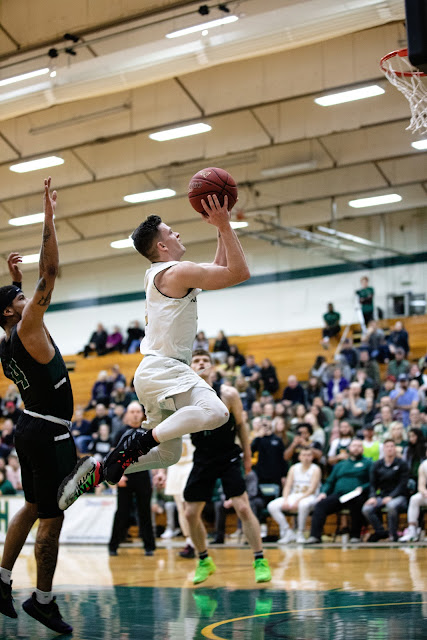 
The dumbfounding numbers for Multnomah University's Justin Martin this season continue to dance off small college basketball score-sheets in a conga line of disbelief.

With four games remaining in Multnomah's regular season, the 5'9" senior guard sees his team positioned to celebrate their first ever post season playoff appearance in their 5 year history as a fledging member of the NAIA's Cascade Collegiate Conference.

Martin,with his whirling blend of motion and launch angles, has led the statistical onslaught this year, pacing the NAIA in scoring with a spectacular 34.52 ppg  average in a bid to become a rare back-to back D-2 national scoring champion.  He leads Mark Gordon of Keiser University by a comfortable 6.29 ppg margin as the season draws to a close.  Martin also tops the NAIA in 3 point baskets with 113 and is among the national leaders in assists as well. Martin may be the embodiment of a  true alpha scorer but he is far from a one-dimensional player.

Simply put, Justin Martin is a presumptive All-American, an honor that surprisingly escaped him last season when the NAIA announced their 1st,2nd, and 3rd Team D-2 All-Americans without a mention of the nation's leading scorer. A similar occurrence this year is highly unlikely

If Multnomah can manage a deep post season run, Martin, a transfer from Wenatchee Valley College in Washington, has a remote shot at reaching 3,000 points in his college career.  Although he missed 3 games in a row earlier this year, he is closing in on a 1,000 point season in his farewell year of college basketball. A spot at the 'next level' soon awaits.

The career numbers and his points per game average justify Martin's place in the pantheon of college basketball's great scorers.  Despite playing at an NAIA level in a 3 point offense that scores nearly 100 points per game and is built around his scoring prowess, Martin rightfully belongs on a list that includes the likes of Doug McDermott, Mike Daum, Hersey Hawkins, Oscar Robertson, Chris Clemons, Freeman Williams, and the great Pete Maravich.

An 'alpha' scorer such as Martin will always have detractors. There will always be a certain level of stress surrounding such stature.  It is common for such scoring dominance to come at the expense of teammates ego's and scoring opportunities of their own.  It can become problematic for a coaching staff trying to devise a consistent offense that will still function when the star's shots are not falling.

In the case of Justin Martin, these are minor difficulties that must be overcome.  Martin is the unquestioned leader of a undersized team that competes in a conference full of bigger and stronger players.  Multnomah has compiled a commendable  28-28 won lost record over the past two seasons. Is is difficult to justify not placing the ball in Martin's productive hands most of the game. Veteran coach Curt Bickley has rightly concluded that heroes and game-changing alpha stars are often born out of necessity and a high usage rate.

Despite his inflated shot attempts, Justin Martin is not a selfish player, as his assist totals will attest.  Mere text without context can be damaging. Perhaps the true measure of an alpha player comes in watching those around him become better.  A case could be made that Lions teammates like freshman Jaeden Ingram and junior Forrest Smith have grown throughout the course of the current season.  Senior guard Trey Fountain has recently assumed an added role on offense, taking the burden off Martin and proving that diverse new identities can emerge downwind of an alpha scorer.

Although shut down for the remainder of this season with a stress fracture, developing sophomore sensation Zach Richardson will finish the year averaging over 15 points a game for the second consecutive season while ranking among the top 3 point snipers in the nation.  His leadership role should increase dramatically following Martin's graduation this year. Anyone who saw Richardson and Martin score 49 points each in the same game last season, will not soon forget the scoring potential of this 6'1" guard.

There are not many opportunities to still watch Justin Martin as this season will soon wind down.The Martin Show is much like a great movie that gets no Oscar buzz because not enough of the right people have seen it, or care to understand the deeper significance of what they were witnessing.

It has been 22 years since that famous courtside basketball fan Jack Nicholson was awarded the Academy Award for the best performance by a leading man in a motion picture.