In the early 1950's, I spent my summers learning how to swim at a bewitching local hotel pool. In the winter I would wait wide-eyed for Christmas and a personal visit from America's top crime fighter, Mr. J. Edgar Hoover.  In short, I was just another disadvantaged kid living a lucky life of  intrigue and romance under the umbrella of palm trees and adolescent innocence.

In those days, my mother worked the night shift as a nurse at the original Scripps Hospital on Prospect Avenue. As a result, I  took up residence among a motley gang of youngsters at the Gillispie Cottage, a way station for underprivileged children of single mothers and working parents, serving the posh California community of La Jolla.  Its founders, pediatrician Samuel Gillispie and his wife, Ada, were on the leading edge of early childhood learning long before nursery schools became the norm.

Today, Gillespie Cottage has evolved into The Gillispie School, a prestigious K-6 institution of high learning and even higher tuition. Now sporting rigorous curriculum development to include arts,music,and physical education,the Gillispie School has received national awards from Apple and the National Association of Independent Schools.  All this was a long way off for us "ground-floor"groupies of the 1950's.

Every summer,  the original 'Cottage Kids" were treated to swimming lessons and poolside lunches every week by the benevolent ladies of the Gillispie Foundation. A couple of times a week, we were transported to the nearby Del Charro Hotel, it's kidney-shaped swimming pool and secluded lanais a magnet for it's hush-hush guest list of the famous and infamous.

The Del Charro Hotel was NOT an ordinary hotel and certainly not an ordinary guest list.  I only came to understand this many years later. Originally the area was a riding school for girls on the outskirts of town. In 1951, the La Jolla Stables were purchased by Texas oil multimillionaire Clint Murchison, who converted the stables into bugalows and built a Spanish style, tile roofed luxury hotel on the site. Room rates started at $100 a night at the new playground on Torrey Pines near Ardeth Road.  It became my playground as well.

So was J. Edgar Hoover and his companion, FBI deputy Clyde Tolson, the pair spending every summer at the Del Charro.  In the winter, at Christmas, Hoover and Tolson would visit Gillispie Cottage and present each child with a Christmas present along with a personally signed greeting card from the FBI. 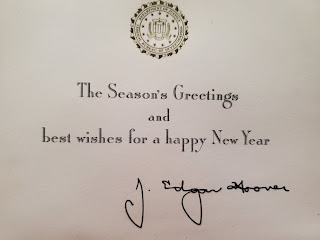 Little did I know at the time what significant events in American history might have taken shape in those secluded Del Charro bugalows occupied by leading political figures, the super rich, Texas oilmen, and organized crime members.  There is sufficient information available today to satisfy the most ardent conspiracy theorists and those wishing to journey down the rabbit hole of fact and fiction.  I didn't have time for any of that then, or now, for that matter.

I do remember seeing a lot of important looking and beautiful people pool side in those impressionable days, but I only had eyes for Nancy Kindall, our Del Charro swimming instructor for the summer.  I was 'Squints' and Nancy was 'Wendy Peffercorn', forerunners personified of that unforgettable 1993 movie classic The Sandlot.

I never faked drowning that summer, but I did feign learning how to swim to earn extra attention from Nancy.  If mermaids existed, surely Nancy Kindall was one. When I found out that she lived just down the alley from my mom and I, I would often hide out behind a nearby garage to get a glimpse of her ascending or descending a large stairway leading to her small apartment behind La Jolla Elementary School. My hormones were on perpetual watch, eagerly awaiting our next close encounter under the guise of a swimming lesson.

Developmental experts tell us that important life lessons can be learned early.  From the still shimmering remains of a nearly forgotten childhood, I now surmise this much to be true:

...that pubescent passion can be a precursor to a more textured love....that prominent people are capable of unsettling things..that tough and tender get inexplicably mixed up in people and places...and a hidden, deeper life, still swirls all around us.

A wading pool can become an ocean once you learn how to swim.