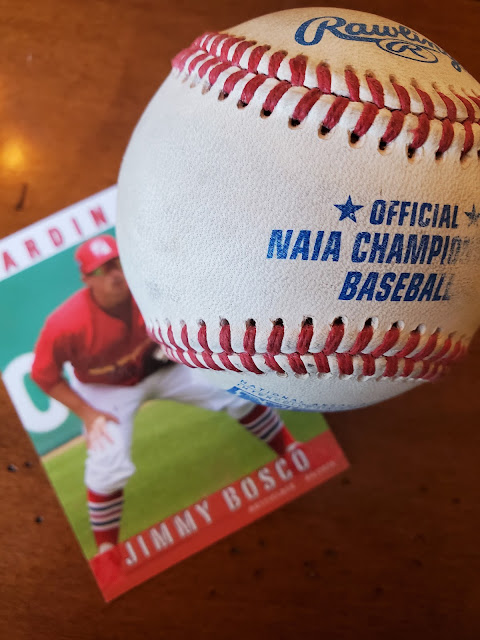 James "Jimmy" Bosco  is currently a Ph.D. candidate in biochemistry and biophysics at the University of Montana, where he teaches Chemistry classes and spends his days in a research lab peering thru a microscope at the cell division in microscopic worms, findings that hopefully could one day lead to a cure for cancer and diabetes.

Back in 2013, after previously playing for two high-profile Division 1 baseball programs at California and the University of Arkansas, Bosco found himself at Menlo College, an NAIA powerhouse based in California.

Bosco, a 5'9" outfielder, led the Oaks that year with a lofty .426 batting average. His remarkable season included a bevy of top marks that paced the NAIA baseball world that season, including first overall in total bases (153) and slugging percentage (.805). In the field he did not commit a single error in 104 chances.

Bosco's season in 2013 culminated in a runner-up finish in the NAIA West Group tournament, loosing to host Concordia University in Portland. He was later voted as the Player of the Year by the Group's head coaches.  He was selected later that summer in the 2013 MLB draft by the St Louis Cardinals and would play 4 seasons in the minor leagues.

Bosco's power stroke from the left side of the plate was remarkable for his size. His 15th and final home run of his breakout season was a monumental blast in Portland, Oregon, that sailed completely out of the cavernous ballpark, landing in a parking lot and coming to rest on the front lawn of a nearby church.

Posted by Harry Cummins at 9:58 AM No comments:

Long Before They Were Amazin -- The 1964 New York Mets 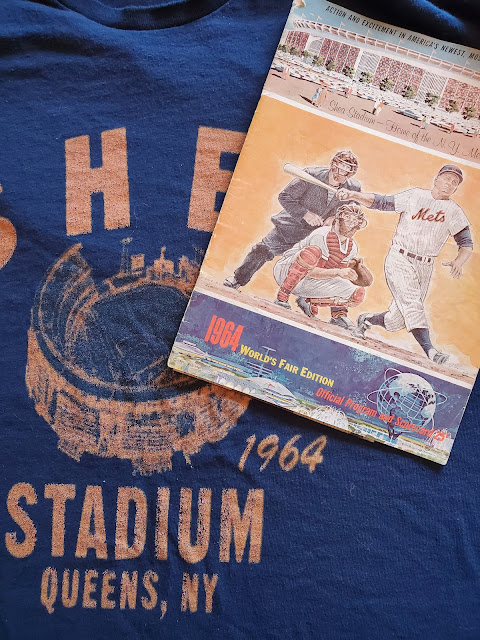 " Been in this game one hundred years, but I still see new ways to lose 'em that I never knew even existed."

Pictured above: Original game program from the day the lovable losers dropped a doubleheader to the San Francisco Giants, Memorial Day 1964.  The Mets would tear up the record books this day and cut an LP record of their own, as the second game loss took 7 1/2 hours and 23 innings to accomplish.  Surely this was one of those ways the 'Old Perfesser' was referring to.

Posted by Harry Cummins at 2:51 PM No comments:

In Praise Of The Pre-Game Warmup

If you rarely pay attention to those often ignored pre-game rituals next time you attend your favorite sporting event, you just might be doing your self a major disservice.

When the Seattle Kracken took to the ice last week for their first ever game as an expansion member of the National Hockey League, I proceeded to watch Morgan Geekie score a pair of nifty goals in the Kraken's inaugural win.

For me, my mind immediately reverted to a pre-game warmup 5 years earlier in Portland, Oregon, when the now 23 year-old Geekie was then a member of the Western Hockey League's Tri-City Americans. I have never forgotten the dazzling stick handling drill Geekie showed off in the pre-game shoot-around.  It mesmerized me and the other fortunate spectators who bypassed the obligatory trip to the concession stand or idle pre-game chatter.... in order to witness what we seldom watch..sports warmup drills.

I was now able to better understand why the Kraken seem to always position the agile Geekie in front of the opponent's net most of the night.

I also recall years earlier, watching a 6'5 shooting guard from Montana State, Tyler Hall, perform similar pre-game magic.   Hall was the Big Sky Conference all -time leading scorer and one of the top 3-point marksman in NCAA history with 431 made 3's.   This past summer, he was a member of the New York Knicks Summer League team. Back then, he was a key member of the Montana State basketball team.

In the Bobcats pre-game team warmups that night, I noticed Hall began to shoot nothing but three's, one after the other. After he made several in a row, I began  to start counting.  When the game time buzzer sounded for teams to clear the floor, my count had reached 41.  I could count the missses on one hand.  I don't remember anything else about the actual game that night.

Perhaps my most memorable pre-game activity occurred on a Sunday afternoon when a high school baseball player, Alex Kirilloff, used a batting practice exhibition before the annual Perfect Game All-American Classic, to deposit EIGHT consecutive balls into the distant right field seats at Petco Park in San Diego.  Kirilloff is now a member of the Minnesota Twins and a big part of their future plans.

So the next time you plan to only pay attention at game time, know that you might miss moments you will never forget. That pre-game hot dog could cost you a lot more than advertised.

Posted by Harry Cummins at 1:08 PM No comments:

More Than A Fleeting Glance - Athletes We Remember 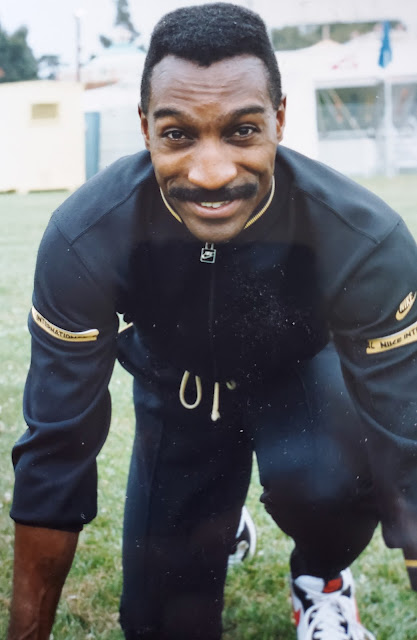 A world record holder, a Gold Medalist and 3-time Olympian, an NCAA champion, and later a successful collegiate coach, Harvey Glance was consistently ranked one of the greatest sprinters in the world for an amazing 12 year run between 1976 and 1987.

His coach, Mel Rosen, once said "Harvey's what I call world class -as an athlete and as a man"

The greatest sprinter in Auburn history, and later it's head coach, as well as head coach at the University of Alabama, Glance is enshrined in the State's Athletic Hall of Fame.

In our memories as well.

Posted by Harry Cummins at 2:51 PM No comments:

For those of us who distill sports as a way to measure our seasons on this earth, the calendar now flips to October.  As it was in pre-pandemic times, many of our favorite fun and games converge this month in a rushing river of  entertainment. The MLB playoffs share the spotlight with the NFL and college football.  Exhibition games begin in the NHL and NBA.  College basketball begins this month with unrecognizable rosters altered by new eligibility and transfer rules.

Is it just me.... but does this all feel notably different this October.

We have all had to come to terms with living in an altered world.  Our disagreements now border on political and personal revolution.  Many are left with the question, 'What is it all about'?  In a search for certitudes, sport becomes distraction, with a Covid-shaped cloud circling our arenas and playing fields.

No matter our age, we each are swept up in a subversive surge toward the inevitable hereafter. The next day.  The next year. Finally our death.  In a world where so many perishables exist, we instinctively long for something that lasts. Something to hold onto! Something to transcend mere time passing.

So, as you search for what is real in this red October, perhaps still leave room for the changing landscape of sport. Look for those athletes in whatever sport, that seem to understand what is means to hold on.  To hold on to values and virtues and real possibilities. They embody the legacy of human effort that sport has traditionally typified. Moments of sheer beauty and possibility.

These are not easy markers to spot from the make believe heights of headlines and box scores, but it seems to be something to which many feel summoned this October, 2021.  Find that place in life where your grip was once the most hopeful and..hold on... it says to us.

The French activist Simone Weil once said that the only real question to be asked of another is "what are you going thru?"  It is a question we are obliged to ask not only of our neighbors and strangers, but also of our athletes.

Assuming duration (holding on to the right things) can ultimately create possibility, let our games go on with a renewed understanding of those who play them..and just why we should watch!

Posted by Harry Cummins at 12:52 PM No comments:

Posted by Harry Cummins at 11:04 AM No comments:

Places We Claim By Memory

We each have them.  Places and landscapes from our past that remain indelible.

Forty-one years ago I lived alone as caretaker in an abandoned mansion that is now part of a winery located west of Portland, Oregon.  For the two years I lived there, my only companions were a Great Dane dog and a friendly ghost who was often heard but never seen. Mostly, I was alone with my own thoughts.

I resided in a small apartment above a 4-car garage connected to the back end of the house.  It overlooked a large lake that today is surrounded by mature vineyards with expansive and unspoiled vistas. My responsibilities included maintenance of a massive lawn and periodically dusting dozens of empty rooms for those potential buyers that seldom came.  I would ride my bike back and forth to a nearby town each day, where I held what most would consider a much more respectable job. It was merely a continuation of what has become for me a lifelong 'straddle' of inner work and outer work, the visible world along side the unseen one.

Last week I paid an early September visit to my former "home" and instantly realized how easily we can repeatedly reclaim these special places thru the natural process of remembering.  Of course, memories become selective after four decades and offer little clue as to why and what we choose to remember and forget.

As long as our memories remain unclouded by age, disease, or searing regret, I realized what a blessing it is to be able to simply recall.  There is abiding affection for these special places (and people) that have either vanished or changed over the years.  Or still remain.

Places and people, like divine promises, that have lovingly persisted and unknowingly transformed us. We caretakers all.

Posted by Harry Cummins at 3:30 PM No comments: