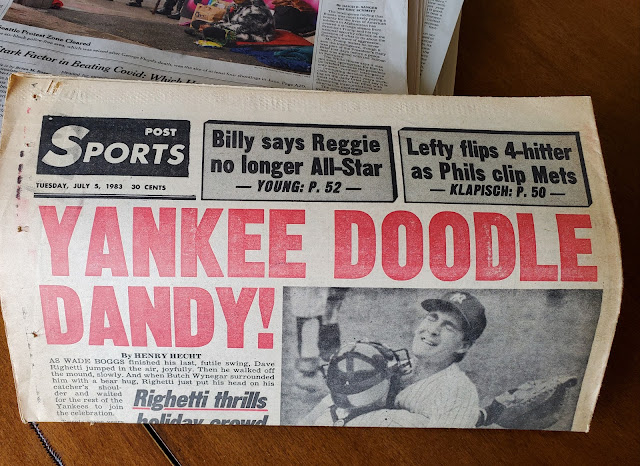 Thirty-seven years ago today, I was in the grip of the greatest summer of my life.

I was house sitting a brownstone on West 83rd street in New York City, my days
unencumbered by traditional employment.  It was 1983 and I was as free and easy that summer as a Dwight Gooden fastball.

On a sweltering July 4, I found myself part of a holiday throng of 41,000 at Yankee Stadium to celebrate a Yankees clash with their rival, the Boston Red Sox.  Boston had taken two of the first three games of the series, collecting nine home runs and 38 hits in the process.  They were as hot as the 94 degree temperature that baked the storied stadium.

Dave Righetti was on the mound for the Yankees with a 9-3 record and just two years removed from being named the American League rookie of the year.  It was apparent early, that 'Rags' had it going on.  He struck out seven of the first nine batters he faced.

Righetti took a 4-0 lead and a no hitter into the 9th inning that day, and the Stadium was alive.  We were on our feet as he walked to the mound to throw the final inning.  Yankee manager Billy Martin said that he prayed for the first time in his baseball career. Home plate umpire Steve Palermo said he didn't even know Righetti was just 3 outs away from baseball immortality. The Yankee southpaw had been snubbed in the voting for the upcoming All-Star game and Palermo thought the applause was intended as a sendoff in recognition of his great first half of the year.

After walking the first batter, Righetti retired the next two hitters and came face to face with Wade Boggs, the last man standing between him and the first regular season no hitter at Yankee Stadium in 32 years.  Boggs hit .361 that season, and was the toughest hitter in the league to strike out. He was leading the major leagues in hits as he stepped into the batters box.

Later that night, I sat on the banks of the East River and reveled in the spectacular fireworks display that ended a most memorable American holiday.

The next morning, I walked to the corner news stand to snare a copy of the Post.  "Yankee Doodle Dandy" the perfect headline proclaimed.

That was once upon a time when we were still allowed to gather for fireworks and baseball.....a time when a serendipitous headline maker topped a summer of  uncloistered imaginings.

Posted by Harry Cummins at 6:23 PM