When I was 10 years old, my mother and I lived next door to a retired matador in the North Park suburb of San Diego.

I would spend many afternoons in my neighbor's dimly lit living room, bullfighting posters from Barcelona decorating the walls. Spanish music and animated stories of his flamboyant capework would fill my impressionable senses.

The year was 1953 and I was more interested, however, in hearing about Eddie Matthews and the recently re-located Milwaukee Braves than I was about some guy named Manolete.  My fascinating new neighbor's front yard soon became my own private playground where I soon became known to passerbys as 'The Popsicle Kid' and where I would invent the best game an only child could ever imagine.

All I needed was an ample supply of discarded popsicle sticks from the curb in front of the corner convenience store  and a baseball bat and I could spend hours playing on this new-found field of dreams.  Before each "game", I would stretch a garden hose across the back of the lawn about 10 feet in front of a low retaining wall and about 30 feet from my batter's box.  This was the area where singles would land.

There were two more higher white brick retaining walls stacked behind the first wall, each with its own landing area.  Perfect for doubles and triples.

Beyond the last wall was a massive grove of banana leaf palm trees.  The place where home runs became legendary and an imaginary crowd would go..well....bananas!

It was no small feat to toss a oscillating popsickle stick in the air and make solid contact with a baseball bat.  My batting eye was soon sharpened to the extent that I seldom missed hitting the stick.  The trick, however, was to strike the stick on its thin end tip which would in turn propel the stick high into the air where it would often ride the wind currents to the outer reaches of my make believe stadium.

Runs would score, outs would be recorded and lineups of real life baseball teams would be exhausted in the playing.  Cracked sticks needed to be replaced. Pitchers duels abounded on those days with little wind.  Blustery days would see the palm trees peppered with wooden sticks.  Light hitting Braves centerfielder Billy Bruton once hit 4 home runs in a single game!

Last night, some 68 years removed from my childish game, I settled in to watch a baseball game on television.  Another kid from San Diego, Bradley Zimmer of the Cleveland Indians, quickly launched a first inning drive deep into the faraway right field seats for his sixth home run of the season.

Keats was right, a thing of beauty is a joy forever.

The End of Innocence. 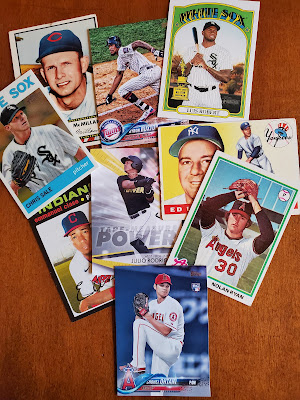 The move came as suddenly as a pop from a wad of bubble gum and likely will signal the end of the most beloved brand of collectible baseball cards for the past 70 years.

Just when mothers everywhere were nearly forgiven for tossing all those pieces of cardboard from the 1950's, and just when a 1952 Mickey Mantle Topps card sold for 5.2 million a few moths ago, The future of Topps is now in question in a sometimes merciless world of business.

I am not sure what I will do with all those boxes of cards in the back of my closet.  First Corinthians 13:11 tells me that I no longer should reason like a child. It is good advice when dealing with childish things.

However, just in case, I am attaching a note to the Topps rookie card of modern day centerfielder Luis Robert of the Chicago White Sox.  "Whoever finds this, DO NOT throw this card away." 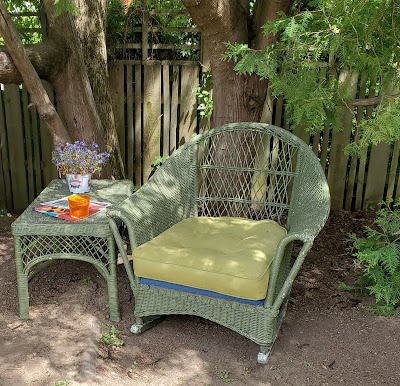 I believe there are nearby places and landscapes we do not really see simply because we are so familiar with them. In our incessant desire to expand our horizons, we often miss our own back yard.

Sitting in the time-worn green wicker on the side of my house, it becomes apparent to me that unless I can actually sense and comprehend what this particular place means every day,  how could I ever expect to assimilate what is happening in a wider world?

We go down so many roads in this life, seeking and seeing so many things.  Do you ever feel these are simply representative of the things we could have seen at home all along?

Pull up a chair and feel the home field advantage!  All the things we need to know are within easy reach thru a conscious awareness. What a day for a daydream!

"Mile of the Century" Celebrated

Sixty-seven years ago today, before a packed stadium of 35,000 in Vancouver, Canada, they held a foot-race that captivated the world.

Billed as the "Mile of the Century", it matched the two best milers in the world before there was Mondo track surfaces and 'super spikes' When it was over, Roger Bannister of England edged John Landy of Australia 3:58.8 to 3:59.6.  It was the first time in history that two men broke the hallowed 4 minute barrier in the same race.

Today, as the world still revels in the Tokyo Olympic mile feats of runners like Jakob Ingebrigtsen, Timothy Cheruiyot, Josh Kerr, and Cole Hocker, history will remember fondly the Miracle Mile of 1954.  For Bannister, the first man to break the 4 minute barrier, it was his second, and last, sub-4 minute mile he ever ran.

Many will remember that Landy had led for most of the race.  At the final turn, he looked over his inside shoulder to check where Bannister was and was suddenly passed on his right.  A bronze statue of the exact moment Landy glanced back now stands outside the Pacific National Exhibition in Vancouver.

For the rest of us mile junkies, there is no such risk looking back to August 8, 1954.

Posted by Harry Cummins at 12:27 PM No comments:

In a series of performances so stunning as to render a singular summation nearly impossible, the track and field portion of the Tokyo Games nears it's conclusion.

To prepare a list of individual accomplishments from these Games is not my intent.  Nearly every event final on the track, and in the field, produced moments full of drama and courage that will be remembered for a long, long time.

In a sport defined by numbers, none stand as tall as the 45.94 gifted to the world by Norway's Karsten Warholm in the men's 400 meter hurdles race.  Or the 51.46 laid down by a 21 year-old Jersey Girl named 'Syd.' in the same discipline.

The new lightning-fast track surface, however, that produced so many eye-popping records in Tokyo, also yielded an alarming numbers of leg injuries that dashed the dreams of far too many athletes. Perhaps a bit more study is needed from the folks at the Mondo Factory in Italy who manufactured the new surface. One suspects this rash of injuries may be more than over-training or the pursuit of fast times.

Track and Field does face a bright future propelled by fresh new faces, but still must wrestle with  lingering questions surrounding doping and drug testing and just how much assistance athletes should be allowed thru advanced technology.

Former double Olympic Gold Medalist Caster Semenya said it best a few years back when she responded to to an interview question with the words "when I come to a hurdle, I simply try to jump it."

It is the perfect metaphor for a sport ...and a world... suspended in uncertain flight.

Posted by Harry Cummins at 12:20 PM No comments: