Here's my Pac-12 Men's and Women's Basketball Power Rankings for this week. Mine. Maybe yours, too. (Note: I did NOT copy the power rankings of Andy Katz.)

Posted by Bill Crawford at 9:04 PM No comments: 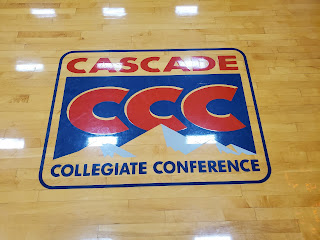 The Eastern Oregon Mountaineers opened their covid-delayed 2020-21 basketball season by defeating the Multnomah University Lions 96-80 today in a contest played at a neutral site in Connell,Washington.

EOU was led by a quartet of players and rode a torrid 63% field goal shooting percentage in the second half to hold off the Lions (0-5).

For EOU, freshman Paul Pennington had 19 points and 11 assists, while Zane Wright scored a team-high  20 points and Brandon Porter added 16 pts.  Justin Jeske recorded a double-double game with 14 points and 13 rebounds in a strong effort for the winners.

In defeat, the Cascade Collegiate Conference's leading scorer, Zach Richardson, led all scorers in the game with a dazzling 31 point output, including 7 made 3's.  Back to back 3's by Richardson in a 28 second span of the second half cut the EOU lead to 83-76, but the Lions never got closer.   Richardson's 31 points and 7 3-pointers represented individual high-water marks this season in the CCC.

Forrest Smith registered 20 points and 10 rebounds for the Lions in the loss.

Posted by Harry Cummins at 5:15 PM No comments:

Welp...the time is now for this week's Pac-12 Men's and Women's Basketball Power Rankings. Here it is.

You win some. You lose some. Just try not to lose too much, especially now.

Bill Crawford is a long time Eugene radio personality and is the play-by-play voice of Eugene Challengers American Legion baseball plus he covers high school sports for Wynne Broadcasting in Klamath Falls. You can find him on most social media platforms.

Posted by Bill Crawford at 7:45 PM No comments: 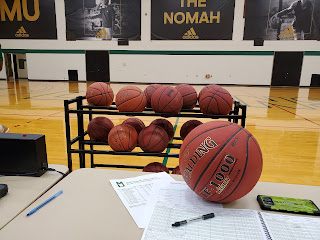 Playing their first game in nearly a year, the Multnomah Lions dropped a 124-75 decision to the #4 ranked Lewis Clark State Warriors Wed night in a non-conference contest in Lewiston, Idaho.

The Warriors (13-1) placed seven men in double figures, led by freshman Oreon Courtney with 20 points on 9 for 11 shooting. Trystan Bradley and Damek Mitchell added 19 apiece for the victors.  Zach Richardson led all scorers in the game with 21 points for Multnomah.  The 3rd year guard hit 5 3's on the night.  Freshman Andrew Classen added 18 for the Lions.

The same two teams play again tomorrow night, before Lewis Clark State begins a best of 3 playoff vs College of Idaho on Feb 18 to determine the Cascade Collegiate Conference's automatic berth in the NAIA national tournament.

Multnomah last played a game on Feb 22, 2020 before being shut down this entire 2020-21 season by Covid-19 restrictions imposed by the state of  Oregon.  The Lions are scheduled to play 3 more games this week in Idaho and still hope to start a revised conference season sometime in March.

Posted by Harry Cummins at 8:03 PM No comments:

From the better late than never department...here are this week's Pac-12 men's and women's basketball Power Rankings:

I always enjoy a healthy, friendly debate. Bring it on!

Bill Crawford is a long-time Eugene radio personality, play-by-play voice of Eugene Challengers American Legion baseball and for high school sports on Wynne Broadcasting in Klamath Falls (when there is high school sports these days). You can find Bill on most social media platforms.

Posted by Bill Crawford at 10:44 PM No comments:

What a great way to start February, 2021 than by giving you the very latest Pac-12 Men's and Women's Basketball Power Rankings, as determined by...ME!

Those are my thoughts as to who is and who isn't the best while trying not to copy the standings verbatim. Please don't be afraid to discuss. Have a great week!

P.S. My digression of the week...if the Groundhog was only wearing a mask today, do you think that spring would be closer to getting here?

Bill Crawford is a long-time Pacific Northwest radio personality and freelance sportscaster. You can find him on most social media platforms.

Posted by Bill Crawford at 8:52 PM No comments: