The Roller-Coaster Ride of Vin Baker 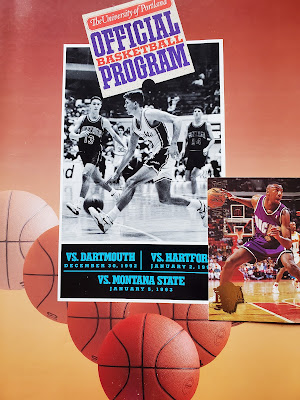 Just a month after Sports Illustrated  ran a headline story calling Hartford center Vin Baker "America's Best-Kept Secret,"  and just a few months before Baker was picked 8th overall in the 1993 NBA draft by the Milwaukee Bucks, Baker and his roller coaster life pulled into the Chiles Center in Portland, Oregon for a Saturday night game with the Portland Pilots.

Portland coach Larry Steele was no stranger at the time to imposing visiting players at the Chiles Center.  In prior years, the likes of LaPhonso Ellis, Hank Gathers, Bo Kimble and Doug Christie had made impressive local appearances.  Yet, Steele was quoted  as saying of Baker, "I took one look at him warming up and was impressed before he even took off his warm-ups."

For the record, Hartford beat the Pilots that night 97-84.  All of us who witnessed the game would easily remember the performance of Baker.  He scored 33 points that night, to go with 9 rebounds, 5 assists, and a Chiles Center record 7 blocked shots.  Hartford and Baker then completed their trip to Oregon two nights later when Baker dropped 40 points on the Ducks in Eugene.  He was not a secret to NBA scouts.

Little did anyone suspect after those two games in Oregon, what a wild-ride would soon  await Vin Baker.

After scoring 41 points in his very first NBA game, Baker fell victim to a hard life of drugs and alcohol that would send him careening thru the NBA as a member of many different teams while still able to win a Gold Medal in the 2000 Olympic Games, appear in 4 consecutive NBA All-Star games, and sign a 7-year, 86 million dollar contract with the Seattle Supersonics.

By 2006, Baker was out of the NBA, his life in shambles.  His 2.3 million dollar home went into foreclosure and he suffered from liver damage caused by his drinking problem.

Years later, broke but still determined to pull himself out of his dark and still descending spiral, he contacted his former boss and owner of the Sonics, Howard Schultz.  What transpired next was straight from the pages of Aesop's Fables.

In short order, Baker became a 6'11" barista making latte's and coffee drinks at a local Starbucks in North Kingstown, Rhode Island, hired by Schultz to become a store manager in training for one of the coffee impresario's many world-wide stores. In 2015-16, Baker would say "It was the best job I ever had." Thanks to Schultz and Calvin Butts of the Abyssinian Baptist Church, Baker was to find deeper happiness in an ordinary working life than all the glamour surrounding the NBA.

Completing one of the best redemption stories in NBA history, Vin Baker has now returned to the NBA as an assistant coach for the Milwaukee Bucks, the team that drafted him some 25 years earlier.

Baker's story is about the preacher's son who turned pro, reaching the heights of fame and fortune, then falling all the way to rock-bottom.  But it is only part of the bigger story.

It's also the story of every human life that manages to hold onto God's grace along with their own humble spirit.  Maybe a little harder lesson to grasp when you were once America's Best-Kept Secret and steamrolling thru the state of Oregon on a 73 point week-end back in 1993.

Posted by Harry Cummins at 4:30 PM