'Jackets Pile On In Portland-Head To NCAA D-II Championships 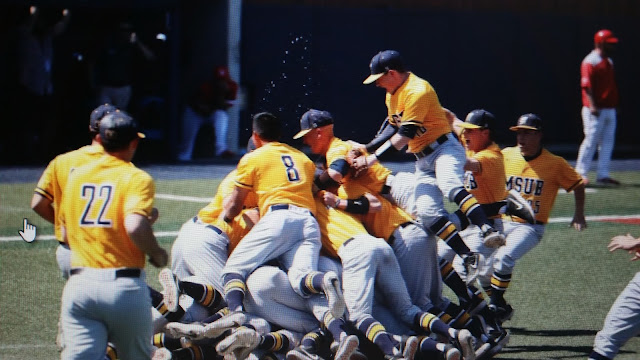 
Riding the crest of a school record 11 game winning streak, including a convincing 3 game sweep of the GNAC Championships in Portland, Oregon this past weekend, the Montana State Billings Yellowjackets will now face the Point Loma Nazarene Sea Lions in the opening round of the NCAA D-2 West Region Baseball Championships this Thursday in La Jolla, California.

Montana State Billings (33-18) is one of 6 teams competing in the West regional, which is divided into a pair of 3 team double-elimination tournaments.  The winners of  West Regional No. 1 and West Regional No. 2 will then play in a best of three series the following week at the Super Regionals hoping to garner a spot in the NCAA D-II College World Series in Cary, North Carolina.

Despite dropping their first 11 games to open the 2019 season, The Yellowjackets regrouped and defeated Saint Martin's University 8-5 this past weekend on the campus of Concordia University to capture the double-elimination GNAC tournament, along their first ever NCAA DII West Region Championship berth.  At 33-18, MSUB ties the school record for most wins in a single season. By winning their last 11 consecutive games, they are on a current 33-7 tear.

The 'Jackets are paced by GNAC Player-of-the-Year Daniel Cipriano, who is hitting .400 with 17 HR's and 51 RBI's.  On the pitching side, Steen Fredrickson (7-1) and Jarrod Molnaa (8-2) lead the way, with a combined 164 strikeouts in 152 innings pitched.  Also heating up at the right time is second baseman Conner Linebarger, who went 6 for 10 in the GNAC tournament in Portland, with 2 home runs, two triples, and 7 RBI's.  He was named the tourney MVP as a reward for his heroics.

MSUB enters the West Regional as the 4th best home run hitting team in NCAA D-2.  They have connected on 82 long balls in 51 games this season, led by the 17 of Cipriano.   Although Cipriano did not hit a home run in the 3 games played in Portland, he saved the exciting 8-5 Championship win with his defensive work at first base.

Saint Martin's scored 4 runs in the last of the 8th inning to cut a 7-1 deficit to 7-5 and had a runner on first with no outs.  Cipriano leaped high to glove a line drive headed for the right field corner that would likely have scored the runner from first and put the tying run at second with no outs.  A batter later, Cipriano raced into short right field to make an over the shoulder catch to end the inning. For good measure, he drove in an insurance run in the 9th with a one-hop smash double off the face of Saints RF Austin Feist, who was forced to leave the game after the attempted diving catch.

Just an inning earlier, Feist had belted a long 3-run home run over the left field fence, his second 3 run blast in two days for St Martin's.  It was a great 3 days of baseball, played under ideal weather conditions.  Sadly,outside of family and friends, attendance was sparse as lack of event publicity by a local media understandably consumed by "Blazer-mania" likely short-changed more fans from witnessing high quality NCAA D-2 baseball in Portland.


*** Augustana (South Dakota) is the defending NCAA D-2 champion and the current No 1 seed in the Central Region entering post-season play.  Colorado Mesa (45-9) is the nation's No 1 ranked team in the newest NCAA D-2 poll released by Collegiate Baseball.