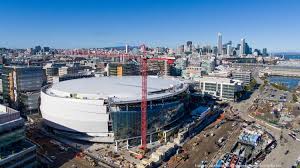 The home of Golden State Warriors, Chase Arena and the surrounding area will become quite a revenue generator starting this summer.

2. Kaiser Permanente will pay approximately $295 million over 20 year period for naming rights to surrounding park and plaza, which will be called Thrive City.

3. If Warriors sign both Klay Thompson and Kevin Durant to max deals, they will become most expensive team in NBA history.

4. Conversely, with the above naming rights and a powerhouse team, the Warriors are expected to generate $200 million per year in revenue, the most ever by any NBA team.
Posted by https//crawscorner.blogspot.com at 12:48 PM