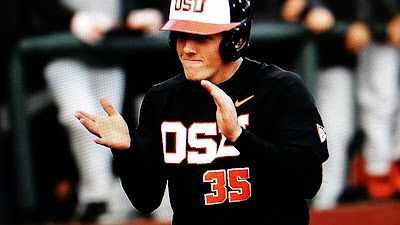 
Clap your hands...Adley Rutschman is now officially on the professional fast track!!!


Major League baseball's Number 1 overall draft pick in 2019 exploded for a 5 for 5 night at the plate Monday in Aberdeen's 6-2 win over Vermont.  Included in the offensive onslaught was a 3-run triple and a solo home run.

The former Oregon State Beaver extended his current hit streak to 10 games with 5 multi-hit  game performances in that span.  Rutschman is batting a sizzling .461 during the streak for the Class A short-season affiliate of the Orioles.

'Can you Hear The A-Train A-Comin'?


P.S.  In a forgivable mishap last night, Rutschman was thrown out at home plate as he attempted to stretch his 3 run triple into a inside-the-park grand slam home run!  Mr. Excitement is on the way to Baltimore!

Aberdeen's IronBirds now travel to Staten Island this week to open the biggest series of the season in the New York Penn League, as the two teams are deadlocked for first place.  Rutschman will be only a ferry ride away from Broadway's bright lights. Boats,trains, and automobiles...they are coming to see the pride of Beaver nation.