"How long I have been running for that
morning flight..
..through the whispered promises and
the changing light..
Late for the sky.


They were both supposed to be halfway to the Hall of Fame by now, twin comets launched skyward from the seaside Shangri-la of La Jolla, California.

La Jolla was my own private paradise as well, having grown up mere blocks from La Jolla High School, the early proving ground of athletic prowess for the brothers Kyle and Bradley Zimmer.

Playing every sport imaginable, including lacrosse and water polo, the Zimmer boys eventually settled on baseball.  Piggy-backing their prep exploits, the pair would go on to spend a year together playing college baseball for the University of San Francisco.  Kyle, a pitcher, left USF after his Junior year by virtue of his selection as the fifth overall pick in the 2012 MLB draft by the Kansas City Royals.  He received a $3 million signing bonus.

Bradley Zimmer, an outfielder, followed his brother into professional baseball two years later when he was ranked as the top bat in the 2014 MLB draft.  He was selected in the first round by the Cleveland Indians who, like the Royals, reside in the Central Division of the American League.

Like everyone else, I anticipated the soon to come day when Bradley would step into a major league batter's box and stare out at his brother, 60 feet 6 inches away, ready to release a mid 90's lightning bolt in his direction.

However, an absurdly improbable series of crippling injuries to both Kyle and Bradley have left us all still waiting for this brotherly breakout.  Still waiting for the predicted stratospheric ascension of the next great brother act to rival that of the DiMaggio's, Alou's and Alomar's.

Misfortune visited Kyle Zimmer first.  He had bone chips removed in 2012.  He missed key time in 2013 with elbow tendinitus.  He spent most of the next two seasons recovering from surgery to repair his right labrum and rotator cuff.  When it looked like he was finally healthy, he was diagnosed with thoracic outlet syndrone.  He underwent surgery in July of 2016 for this potentially career ending injury.  He suffered shoulder soreness all of the 2017 season, and shoulder fatigue in 2018,  ending his season after retiring just one batter in spring training.

Thanks to a unique form of athletic training with Driveline Baseball at an industrail park outside of Seattle, Zimmer has finally made his major league debut with Kansas City this year, seven years after he was first drafted by the Royals.  Last week in a mid game relief appearance, one of his pitches was clocked at 99mph.  Several days later however, the Royals returned him to the minors to continue to refine his rusty mechanics and regain his feel for pitching.  He appears to be healthy and the Royals will explore employing him as a late inning piece for their bullpen.

At about the same time last week as his brother Kyle returned to the minors, Bradley Zimmer was finally pronounced ready to begin playing baseball again after a season long absence from the game.  Brad made his MLB debut in 2017 and as one of the fastest players in the game, proceeded to steal 18 bases in 19 attempts. Statcast showed him with the hardest hit ball of the 2017 season by a Cleveland Indian (114.6 mph)  The Indians began to envision their lead-off hitter and defensive stalwart in centerfield for years to come.

However, the Zimmer injury curse was about to visit brother Bradley with equal fury.  He suffered a concussion while attempting a diving catch in the outfield and made his first trip to the injured list.  Soon after, he was ruled out of the rest of that 2017 season with a broken hand.  Finally ready to resume activities from that injury, Bradley hurt his shoulder and in July of 2018, had surgery that carried a crushing 8-12 months recovery period.

Late in Spring Training of this season, ahead of the predicted rehab schedule for the shoulder surgery, Brad seriously injured both oblique muscles months apart..  He has yet to play a game in this 2019 season, but the Indians say he will soon begin to work his way back up the ladder as he is once again healthy.  He is hopeful he can rejoin the major league club when rosters expand September 1st. Opportunity still awaits in the Tribe outfield.

"Bradley is a freak of nature," says Indians teammate Adam Cimber, who played with Zimmer at the University of San Francisco.  "He's tall and fast, he got a great arm and he can swing it for power"

Both Bradley and Kyle now hope their physical problems are finally behind them.  Thru prolonged and cruel adversity, the snake-bit brothers have learned the value of patience... and of dreams deferred.  Sometimes, reaching a dream's destination turns out to be simply its beginning.

Spoken with much more than my hometown optimism, I firmly predict that sometime during the 2020 MLB season, at either Progressive Field in Cleveland or Kauffman Stadium in Kansas City, we at last shall see the once celebrated but now nearly forgotten Zimmer brothers go head to head in a big league game.

This rare senario has only happened five times in the last 50 years of major league baseball.  It last played out in 2013 when Toronto's Colby Rasmus doubled off his brother Cory, who was pitching for the Atlanta Braves.

Or how about this for the full-blown arrival of a big league dream...Kyle and Bradley Zimmer representing the American League in the 2020 All-Star Game to be held in sunny Southern California.  Injuries now vanished in the rear-view mirror and living life as they once did as boys in carefree La Jolla.....where everyday is a perfect beach day. 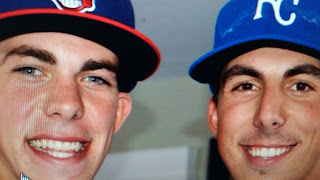 Posted by Harry Cummins at 6:01 AM