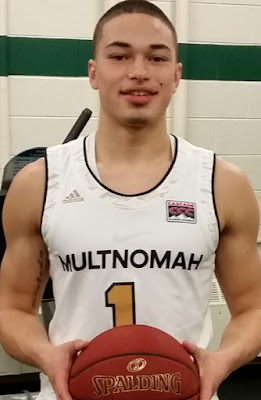 Multnomah sophomore Zach Richardson scored a season-high 32 points on 10 made 3's and teammate Stepan Zavydovskyy pulled down 15 rebounds and blocked a NAIA season-best and school record 12 shots, leading the Lions to a convincing 113-81 win over a road-weary University of Maine Ft Kent basketball team Saturday afternoon.

Richardson has now made 40 3 point baskets in Multnomah's first 9 games and moves within five long range baskets of  teammate and national Div-2 leader Justin Martin, who has 45.  Richardson (17.1 ppg)  is now shooting an impressive 48% from distance on the season.  His 32 points against UMFK came in just a little over a half of play, as Lions coach Curt Bickley was able to give significant minutes to ten different players in the win, moving MU's record to 6-3 on the year.

Zavydovskyy narrowly missed a 'triple-double' as he scored 8 points to go with his 15 boards and 12 blocks.  He now moves into second place in current NAIA D-2 stats in blocks per game.  Martin, the nation's leading scorer, contributed a fine all-around game to the win, scoring 22 points to go with 9 assists and 5 steals.  Martin is attempting to lead the country in both points and assists as he is averaging nearly 8 assists per game to go with his NAIA leading 32 ppg.

Forrest Smith also filled the stat sheet for the victors, scoring 15 points, with 7 rebounds, 5 steals, and 3 assists.  The Lions recorded  18 steals on the afternoon as the visiting Bengals from Ft Kent, Maine were playing their 5th game of a winless 8-day West Coast road swing through California and Oregon.

Multnomah now concludes the pre-conference part of their schedule, and will begin Cascade Collegiate Conference play next weekend.  It is the first of 5 straight games on the road for the Lions.

Posted by Harry Cummins at 5:30 PM