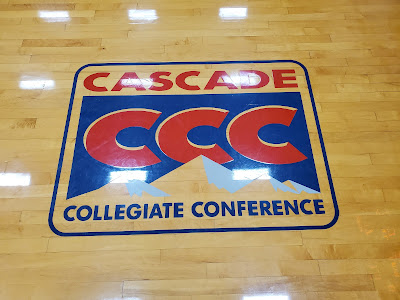 Multnomah University senior guard Justin Martin's spectacular 53 point offensive onslaught Friday night, the high-water mark this season in the NAIA, went for naught as touted 6'9" freshman Nathan Presnell countered with a breakout 39 point, 10 rebound performance of his own to lead visiting Simpson (Calif) of the Cal Pac Conference to a 112-91 win over the Lions of the Cascade Collegiate Conference.

Martin, the defending NAIA D-2 scoring champion and its current scoring leader at 33.6 ppg, also had 7 assists to go with the 53 points, before forced to retire late in the second half with severe leg cramps. It marked the third time in two years that Martin has scored 50 or more points in a game, second only to his record-setting 71 point game last year against cross-town rival Warner Pacific University.

It was also the astounding 11th time in just over a full season that Martin has tallied 40 or more points in a single contest.  Martin was also nearly perfect from the charity stripe vs Simpson, making 13 of 14 free throws as a net result of his acrobatic drives to the basket.

Simpson (4-3) had a narrow 51-46 lead at the half, but rode a  torrid .703 shooting percentage in the second half to the impressive win.  Presnell was a Georgia Coaches Association  first team All-State selection last year at Hiram High School in Hiram, Ga,  and was also an outstanding quarterback and punter on the football team.

Presnell received plenty of support from Red Hawk teammate Harvey Barr who used his 7'1" frame to shoot 8 of 10 from the field, posting a 17 point, 10 rebound double- double effort against the much shorter Lions  Senior leader Blake Trent chipped in with 20 points on 7 of 10 shooting, 6 of 9 from long range. Ken Anguik contributed 10 points and 12 rebounds to the win, while Dylan Banks dished out a career-high 10 assists.

Simpson's international roster features players from Australia, Croatia, Slovakia, Nigeria, Turkey and England.  Coach Todd Franklin has a lot to smile about and says he is expecting 3 currently ineligible players to soon join the team.  This should be a team to watch closely later in the season.

"We haven't even scratched the surface of how talented this team can be," says Franklin, who once attended and played for Multnomah University for one semester.   It was an enjoyable homecoming for the coach, as he saw his team score 112 points on back to back nights in the Portland gym.  The Red Hawks routed Northwest Indian College 112-52 on Thursday night.

Multnomah now drops to 5-3 on the year. MU center Stephan Zavydovskyy had 13 rebounds and blocked 4 shots for the Lions, while sophomore Zach Richardson had 8 points, 7 rebounds and 2 steals.

As for Justin Martin, known primarily as a defensive specialist in high school in Spokane, Washington, he is moving ever closer to his dream of playing basketball at the next level, leaving the NAIA record book reeling in his offensive wake.