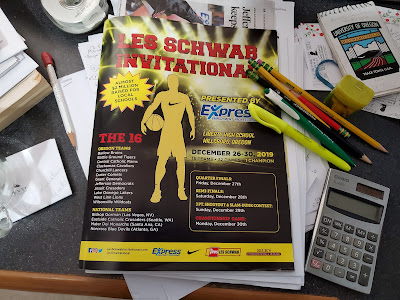 Many of us who attend the annual Les Schwab Invitational basketball tournament every December, play the game within the game...trying to identify which of the elite high school players will be a slam-dunk NBA player.  A one-and-done wunderkind.

In the past, this has been a somewhat easy exercise.  Some of these players looked like they could nearly hold their own in the NBA.... while still pondering their prom dates and future college choices.

The bottom line ...this is perhaps the best high school holiday basketball tournament in America, a not to be missed event.  Personally, I have attended 22 of the 24 LSI  tournaments, year after year relishing the young talent on display.

This years 2019 edition of the LSI presents a heightened challenge in identifying the sure-fire players who will ascend to the highest level of the game.  This present 16 team field is loaded with college level talent, including a hand-full of potential high D-l level players.

This year's championship final (Monday, Jan 30) will feature Devin Askew of California's Mater Dei (Kentucky commit) vs a trio of fascinating juniors from Eastside Catholic in Washington. Eastside is led by Shane Nowell, Nolan Hickman and the most interesting player in the tournament, 6 foot 4 inch,270 pound J.T Tuimoloau, who is the number one rated (FOOTBALL) player in the national class of 2021.  He can also hoop!!  If you also happen to need a third baseman, give him a call!

Drawing most of the headlines this week at Liberty High School in Hillsboro, Oregon, has been 6'11" Jr. Nathan Bittle of Crater High School in Central Point, Oregon.  Bittle in ranked 13th nationally by ESPN and scored 41 points in the first round win over Clackamas and their own highly touted 6'8" junior, Ben Gregg.

Also drawing interest from college coaches and 'amateur scouts' in attendance has been a pair of highly skilled local freshman.  Marquis 'Mookie' Cook of Jefferson and Jackson Shelstad from West Linn.  Fans of the "projection" game are envisioning great things ahead for this polished pair.

So, who then will graduate from this prestigious current edition to go on to play in 'The League'?

Although none are clear-cut choices,  I can imagine a handful of players from the 2019 LSI to play in the NBA.  If I could only select one favorite..it would be 6'9" Jr.  Kaden Perry of Battle Ground, Washington, who has already given his verbal commit to play for Mark Few and the Gonzaga Bulldogs.

May the 'game within the game' so many of us play, be alive and well at a high school gym near you!