The Ghost of Fred Hare 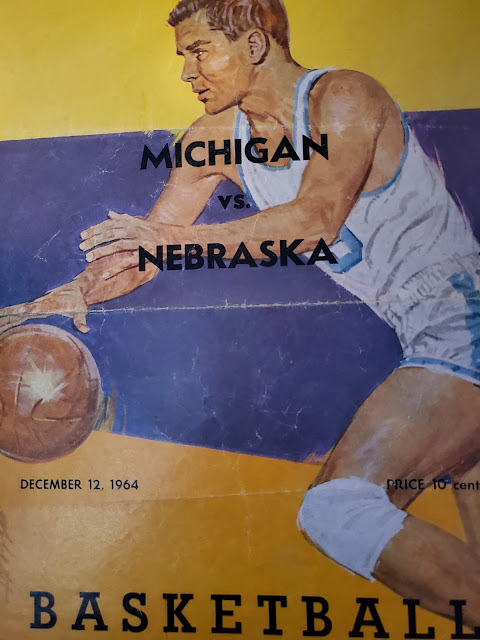 "You know, I believe we have two lives.
The life we learn with... and the life we live after that"
-Iris Gaines,from the movie The Natural

It has been nearly 55 years since they played the greatest basketball game I ever saw.  A persisting ghost from that game still lives in my attic, loosely pressed between the pages of a variegated and wrinkled game program.

However, this story is not about that snowy December night in 1964 when Nebraska sophomore guard Fred Hare blindly flipped the ball backwards over his head as the buzzer sounded, giving the Huskers a 74-73 upset win over No 1 ranked Michigan and their near-mythical All-American Player of the Year, Cazzie Russell.

No, this story is about the rest of Fred Hare's life that ended on October 2, 2014, at the age of 69. His final years were spent in the isolation of a small north-central Texas town, confined to an electric wheelchair and separated from family and friends. News of his passing failed to reach his own family for almost a year.

Since that celebrated winter's night in Nebraska basketball lore, this much has been pieced together from the turbulent and nomadic years that shadowed Fred Hare as tightly as any lock step defender:


Two days before Christmas 1967, early into his final year at Nebraska, Hare quickly showered at halftime of a Big 8 game against Wyoming and walked out of the locker room, never to return. The exact circumstances remain clouded.

After a tryout with the Los Angeles Lakers, he traveled extensively with the Harlem Clowns and Harlem Globetrotters.  He also played briefly in Canada.

His mother died in 1967 at the age of 47. After the funeral, Hare sold all his belongings and boarded a plane for Mexico, where he played three seasons for the University of Americas, averaging 35 points a game.

In 1972, Hare survived a life-threatening head-on crash on a Colorado interstate, spending months recovering in a local hospital.

Fred Hare came from a large family of 18 brothers and sisters, including stillborn twins and triplets. Many of his siblings met tragic ends and by 2000, Hare was the only one left, living with his second wife and helping a son with a roofing business.  His own father, a sharecropper,had passed away when Fred was just an infant.

Hare had open heart surgery somewhere around 2008, having already suffered two heart attacks in Mexico in earlier years.  Two of his sons were born in Mexico.

In a span of a week, toward the end of his senior year at Omaha Tech, Hare was voted 'Prom King' by his fellow students, most of them white.   A few days later, Parade Magazine named him one of top 15 high school basketball players in America, a list that included a 7 foot sophomore  Lew Alcindor, later to become Kareem Abdul-Jabbar, the all-time leading scorer in NBA history.

Hare spent many years attempting to write a book about his roller-coaster life.  Trying to chronicle his journey was "For the Lord, and part of a promise to my mother that I'd finish college" Hare said in a 2011 interview. He took writing classes to finish his college credits.  The book was finally finished by his son, Freddie Lee Hare, Jr.

I never knew Fred Hare, although I met him once in the men's department of Gold's Department Store in Lincoln, Nebraska, days after his unforgettable no-look shot had reverberated across the sports pages of America.  "Thanks for the memory" I said, and shook his hand. At the time, we both were shopping for warmer clothing to shield us from the cold landscape that lay ahead.

We were also both students then, learning all we could about the tumultuous world as we knew it in 1964.

To this day, I remain haunted by the ghost roaming my attic.  Haunted still by the shadowy significance of every human life.