The Confounding Persona of Caster Semenya - Regulate or Celebrate? 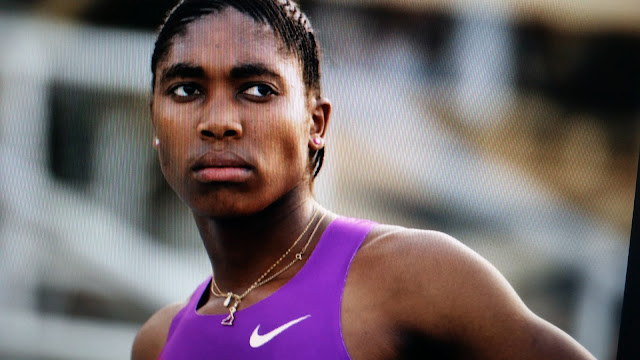 It should be said straight off that there are imponderable questions in this life that yield no right resolution. In such cases, it is simply best to move on without a satisfying answer.

Caught in a modern-day legal and media maelstrom, Caster Semenya, the two-time 800 meter Olympic champion from South Africa, is moving on.

Semenya has openly stated that she will not submit to the mandated I.A.A.F. ruling that requires inter-sex athletes to undergo hormone therapy to lower their naturally elevated testosterone levels.  Earlier in May, the Swiss-based Court of Arbitration for Sport upheld the ruling set forth by track and field's governing body in an effort to preserve a level playing field in women's track events ranging from 400 meters to one mile.

In response, the 28 year-old Semenya has entered a loaded 3,000 meter field for the upcoming Prefontaine Classic to be held June 30 at Stanford University.  She will be competing at a mostly unfamiliar distance against three of the greatest female distance runners of all time; Sifan Hassan of the Netherlands, Genzebe Diababa of Ethiopia and Hellen Obiri of Kenya.

The controversial ruling has left impassioned proponents on each side.  It has also left Semenya and other similar athletes with no good options if they refuse to take hormone suppressing drugs for six months and then maintain levels far below what they were naturally given at birth.

They must either compete against men, participate in events limited to inter-sex athletes, if even available, or elect to compete around the edges of the ruling. (100/200m or  5,000m or longer.)  Semenya has elected to go up to the 3,000m (1.86 miles)  tho it is not an event currently contested in the Olympic Games.

I am not wise enough to offer a solution to this incredibly complex issue that reaches far beyond athletics.   I don't fully understand words like hyperandrogenic.  I do not know nearly enough about 46, XY chromosomal makeup or testosterone levels measured in nanomoles per liter.  Or what adverse consequences could result from a human body dramatically altered from its natural state. Maybe most importantly, do any ruling entities really know enough about the exact effect of gender and testosterone on performance at different distance events.

What I DO know is this.  I have followed the 28 year-old Semenya's career with great interest.  I have witnessed her dominating races in person many times.  I have listened to her words in interviews.  I have seen how she has handled decades of ridicule and scrutiny in front of a watching world.

I believe Caster Semenya is a caring person of deep intellectual and emotional substance.  Her view of the world should be admired.  In a recent interview following her final 800 meter race (her staggering 30th consecutive win at the distance!) before the ruling took effect, she said:

"We are all on this earth together.  None of us really know what we are doing.  If there is a hurdle in my path, I try to jump it"

An oversimplified explanation of life?

Already schooled in hurdles and hassles, maybe the perfect future event for Caster Semenya just might be  ...the steeplechase.

Posted by Harry Cummins at 1:43 PM