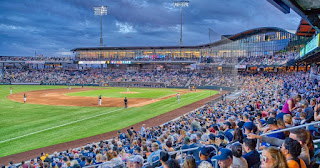 The Las Vegas Aviators of Triple AAA Coast League are playing in  brand new 10,000 seat ballpark this year and so far it has been a smashing success.

Understatedly named Las Vegas Ballpark, in 45 home games the Aviators have averaged 9,650 fans per game. That not only leads all of minor league baseball in attendance, it also beats MLB’s Miami Marlins average this year of 9,400 fans per game. 2004 was last time for a season a minor league team bested a major league team, when Sacramento bested big league Montreal in average attendance for an entire season.
Posted by https//crawscorner.blogspot.com at 5:26 PM