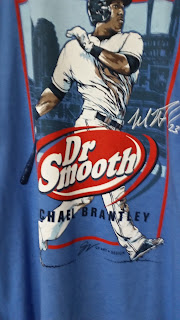 
Sweet-swinging Michael Brantley of the Houston Astros has gone from the "player to be named later" in a 2008 trade to perhaps the leading candidate for the American League MVP award this year.

Brantley is riding a current 23 for 52 (.442)  hit streak that has moved him to within 1 point of the AL batting average lead currently held by D.J. LeMahieu (.333) of the New York Yankees.

Dubbed 'Dr Smooth' for his easy style of play, Brantley is in his 11th major league season, 10 with the Cleveland Indians.  The 3 time All-Star signed a free-agent contract with Houston this past off-season, and has put up MVP type numbers this year with the first place Astros.

Brantley, 32, is the son of former MLB player and coach Mickey Brantley.  The Indians acquired the outfielder in the 2008 trade for C.C. Sabathia as "the player to be named later".  Suffering thru several injury riddled season with the Indians, Dr Smooth is healthy and showing why he may be the best off-season acquisition by any team in baseball.

Coming off a 3 for 3, two homer game yesterday against the Texas Rangers, Brantley and his Astros play host to the Oakland A's tonight.  Brantley will sit comfortably in his familiar clean-up spot in the lineup...baseball's smooth hit man.
Posted by Harry Cummins at 10:08 AM