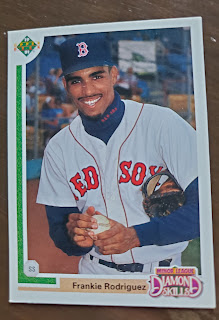 In 1991, 18 year-old Howard College pitcher Frank Rodriguez was awarded the Dick Howser Award, baseball's equivalent of the Heisman Trophy. In the 29 years since, no other junior college baseball player has won this prestigious award. In 2019, the most recent winner was Adley Rutschman, the Oregon State University catcher and Number #1 MLB draft pick.

That's how dominant and deserving Frank Rodriguez was during that '91 baseball season, and on that unforgettable night I saw him pitch in the championship game of the 1991 JUCO World Series in Grand Junction, Colorado.

Rodriguez and Howard College faced off in the Championship contest that Saturday night against Manatee (Fla) Community College, who entered the game with a robust.323 team batting average. Rodriguez was a major league bound pitcher and shortstop, who would be drafted just days after this game by the Boston Red Sox.  Boston had first drafted Rodriguez in the 2nd round a year earlier, but could not come to terms with the right-hand flame thrower and Rodriguez instead elected to spend a year at Howard in Big Spring, Texas.

Rodriguez was named to start the opening game of the 1991 double-elimination Series, but was removed after one inning after aggravating a rib muscle injury.  He came back two days later to beat Allegany (Md) Community College, pitching 10 innings and striking out 15 batters while walking just three.

The best was yet to come.

In the Championship Final, Rodriguez drove in the game's first run for Howard, then proceeded to fan 17 Manatee hitters, including the final four batters he faced, en-route to a 7-2 win.  His 33 strikeouts in his last two games tied a JUCO World Series record and earned him the MVP Award.  He walked only one batter in his 17 strikeout gem, played before an overflow crowd of 9,550.

Rodriguez entered the Series with some impressive credentials as a batter as well, with a NJCCA leading 25 home runs, and added another long ball during the Series. For his only season in the JUCO ranks, he hit .450 and drove in 93 runs. He hit .333 during the World Series, while driving in 6 runs.

Lost in defeat, but not in my memory, was the performance of loosing pitcher James Dorough, who fanned 12 batters in 7 innings for Manatee. Robin Jennings went 3 for 4 in that championship game and paced Manatee  in the Series with a .440 BA, with 4 home runs and 13 RBI's.

Rodriguez's performance was the 3rd highest strikeout performance I have been privileged to witness in person in my lifetime. Topped only by the 18 K game turned in by Brandon Bargas of Rogers State College in the 2012 NAIA World Series in Lewiston, Idaho... and the 19 strikeout gem thrown by Nolan Ryan in 1974 against the Boston Red Sox in Anaheim, Ca, an AL record at the time.

Today, Rodriguez is the pitching coach for SUNY Maritime College in the Bronx, NY.  He pitched for four teams over the span of seven seasons in the major leagues.

The night he won a national championship with a 'swing and miss' spectacular, will live forever.

Posted by Harry Cummins at 4:40 PM