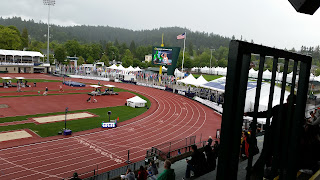 Alabama junior Shelby McEwen became the new season leader in the high jump when he leaped a career best 7'7 (2.31m) at the Carolina Challenge.  The sky is virtually the limit for this former basketball player who once won a  high school slam dunk contest in Las Vegas by duplicating Michael Jordan's signature free-throw line dunk staged at the 1988 NBA All-Star game.

Here are the latest team rankings:


Be sure to check back with Craw's Corner throughout the indoor and outdoor seasons, ahead of the NCAA D-1 Indoor Championships March 9-10 in Birmingham, Alabama, and the Outdoor Championships in Austin, Texas June 5-8.