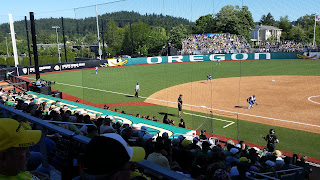 In 1933 Paramount Pictures released the film 'Duck Soup' starring the four Marx Brothers. The making of the movie was marred by bitter contract disputes, crippled relationships and a threatened walk-out by its principal players.

In case you missed this original slapstick adventure, they are staging a modern-day revival in Eugene, Oregon right now featuring the University's women's softball roster, or what's left of it.  Like its forerunner, Duck Soup II is likely to become a box office disappointment, hindered by similar upheavals in production.

By now, you have most likely heard the details of this absurdist tale.  The successful coach who left for more money.  The mistrust directed toward his replacement. Players claiming they were lied to and packing up their gloves for greener fields.  This all reminds me of the remarks from Groucho Marx himself when asked to explain the curious title of his new film to the confused media of his day.

" You take two turkeys, one goose, four cabbages, but no duck, then mix them all together. After one taste, you'll duck soup the rest of your life.'"

As for me, one of my favorite sports feasts of the past few years has been attending the two-day Prefontaine Classic track meet at Hayward Field, then strolling to the 'Jane' next door to witness the Lady Ducks softball team clinch back to-back berths in NCAA Women's College World Series.

We all know what happened to historic Hayward Field.  Now the wrecking ball is on the doorstep of the Duck's heralded softball program.

The Master Chef of comedy, Groucho Marx, long ago concocted a warning for those consumers of high profile sports in our present culture.

Two turkeys, one goose, and four cabbages can spoil a lot of things.