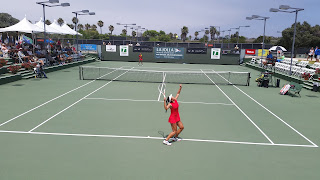 Under McNamara's tutelage that began in the Spring of 2015, Wang rose to the No 1 ranked player in China, and has moved her world ranking from just inside the top 100 to currently inside the top 20.  She advanced to a career best third round of the Australian Open last month in Melbourne and stunned Venus Williams in the first round at Roland Garros last year.

Wang Qiang becomes the first Chinese player to finish a year inside the world's top 20 since LiNa's retirement in 2014.  McNamara had been working with Chinese players in recent years, hoping to help them gate-crash the world rankings.

Peter McNamara is a former two-time Wimbleton men's doubles champion along with partner Paul McNamee, and was Australia's top ranked singles player in 1981 and 1982, claiming careers wins over the likes of Jimmy Connors and Ivan Lendl, and reaching No 7 in the world in 1983 before a knee injury halted his meteoric rise.

Giving no reason for the break-up, McNamara made the announcement this week, citing mutual agreement.  Wang is currently entered to play the Dubai Duty Free Tennis Championships which begin on February 17th.

* Stay tuned to Craw's Corner for the latest from the world of tennis as early season news often brings changes in coaches. Also from China this week comes word that Sven Groeneveld, once Maria Sharapova coach, has severed his relationship with promising Chinese teenager Wu-Yibing, because of the player's mother.  Never a dull minute!