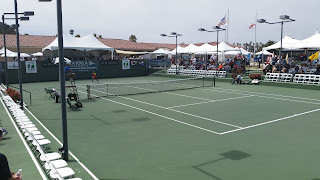 
When 6 foot 11 inch Reily Opelka collected his first ATP tour title yesterday in the finals of the New York Open, he served notice to the tennis world that his ascent to the summit of American men's tennis may not be far away..

The 21-year old, ranked No. 89 in the world coming into the tournament, advanced to the finals of the event by knocking off the top seed and the No 1 ranked American, John Isner.  This upset coming on the heels of Opelka's surprising win over Isner in the first round of the Australian Open last month.

American men's tennis is on the up swing!!!

Posted by Harry Cummins at 4:33 PM