Tagg Bozied - The Birth Of A Bobblehead 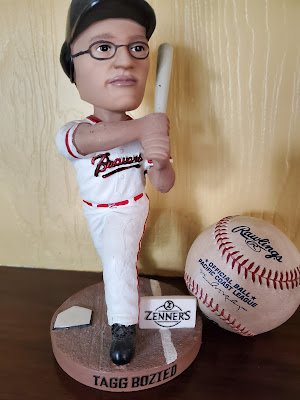 As most of us have come to realize, life is given to bizarre and hair-trigger shifts in fortune.

Least I ever forget and begin to celebrate a personal triumph to loudly, I need only glance at the bobblehead doll that rests on my desk. It is the likeness of a somewhat obscure baseball player named Tagg Bozied.

Bozied was a great collegiate player in 1999, when he won the West Coast Conference triple crown playing for the University of San Francisco.  He hit .412 for the Dons that season, along with 30 home runs.  He led all of NCAA D-1 baseball with a .936 slugging percentage. He earned a spot on the USA national team and still remains the WCC record holder with 60 career home runs.

Represented by the iconic sports agent Scott Boras, Bozied was a third-round pick in 2001 by the San Diego Padres... and then proceeded to play 11 seasons in the minors.  He never realized a single at-bat in the major leagues.  Many never knew his name.

Yet, his bobblehead adorns my cluttered desk, sitting deservedly next to the great 'Mr. Padre' himself, Tony Gwynn.

There is often a myriad  of reasons why a gifted performer never reaches the pinnacle of his chosen profession.  If he so elected, Tagg Bozied could perhaps point to a 2004 July night in NW Portland, Oregon as the pivotal moment in his career. The night everything changed while wearing the uniform of the Portland Beavers.

I had planned a speedy exit from the Pacific Coast League game that night, walking to the left field gates of PGE Park in the 9th inning to catch the MAX train downtown.  The Beavers trailed Tacoma 5-4 awaiting their final turn at bat.

Having watched too many desultory Portland defeats in the past, I considered beating the crowd and leaving before the Beavers came to bat.  I decided to stay as Portland begin to collect base runners..until they had loaded the bases... and up stepped Tagg Bozied, who was tearing up the PCL and on the doorstep of a major league call-up.

Bozied proceeded to smash that most rare and dramatic of baseball home runs, a walk-off grand slam deep over my head, a tape measure blast into the left field seats. It was his 16th HR of the season.  I was glad I had stayed to see it, and as he rounded the bases, I watched his jubilant teammates gather at home plate for a wild celebration.

As Bozied approached home, in a hero's baseball ritual, he leaped for joy into the arms of his waiting teammates.  Suddenly, the mob at home plate began to part like the Red Sea.

Bozied had felt his left knee collapse before landing on the plate.  He had blacked out as teammates were hitting his helmet and hugging him in joy.  When he quickly came to, he glanced down to see his kneecap pushed high up into his quadriceps.

The Beavers first baseman had severely ruptured his patella tendon and was loaded onto a stretcher and placed in an ambulance, headed to a nearby hospital.  He was never again the same player, tho he kicked around the minors for many more seasons.

Tagg Bozied had gone from hitting a walk-off grand slam home run to landing in the back of an ambulance. To this day, it remains the most bizarre thing I have ever witnessed on a baseball field.

Bozied mustered one final season of greatness in 2010.  Playing for Reading of the Eastern League (AA), he hit .315 with 27 home runs in 104 games.  Failing to get a call to the majors, at age 31, Bozied retired at the end of the following season.

A month after that  season-ending injury in Portland, the team announced it was paying tribute to it's shelved slugger with a "Tagg Bozied Bobblehead Night"

For his part in agreeing to the promotion, Bozied was given 100 of the one-of-a-kind collectible. I waited in a long line that night to get mine.

Nearly every day since, I have flicked the bill on Bozied's plastic cap with my finger, watching his bespectacled head bobble up... then quickly dart down. A bat in his hands, he still swings!

An every-day metaphor hard to miss.

Posted by Harry Cummins at 6:20 PM