The Immortal Life Of A Line-Drive 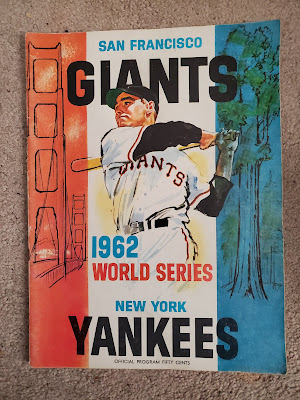 In 1962, I temporarily went AWOL from a checkered college career in order to attend the entire Bay Area portion of the World Series between the San Francisco Giants and the New York Yankees.   What sane lad could ever choose academics over such a higher form of education?

There I was, sitting in Seat 3, Row 3, Section 28 of a wind-blown Candlestick Park, my heart at gale-force as I watched Willie McCovey step into the batters box to face the Yankee righthander Ralph Terry.  To this day, that crucial confrontation still remains as the most momentous at-bat I would ever witness on a baseball field. Thousands of games later, nothing has come close.

McCovey, the future Hall-of-Famer and one of the most feared sluggers in the game, was on the verge of bringing the frenzied city of San Francisco its first World Series championship.  It was the chips down Game 7 and the Giants were trailing the Yankees 1-0 in the bottom of the 9th. There were two outs but the Giants had the tying and winning runs in scoring position thanks to a Willie Mays double to right.

Terry was obviously tiring.  He had won more games (23) than any other American League pitcher in 1962. He entered the 9th inning shutting out the Giants on just 2 hits, one of them by McCovey, who had laced a two-out triple off him in his last at-bat.  In Game 2 of the Series, McCovey had also smashed a majestic HR off Terry in a 2-0 Giant win.  McCovey "had his number" as they liked to say in those days.

If that wasn't enough to think about, Terry had to be also pondering the 7th game of the World Series just 2 years earlier, when he coughed-up a game-winning, walk-off home run to Bill Mazeroski of the Pirates.  With Orlando Cepeda in the on-deck circle, Terry elected to pitch to McCovey.

The Giants 6'4" first baseman swung at the first pitch from Terry and pulled a deep foul ball to right.  Some 40,000 + fans in attendance shared a collective deep breath while Yankee second baseman Bobby Richardson moved instinctively a few feet to his left.

On Terry's next offering, his final pitch of the game, Willie McCovey ripped what he would later describe as the hardest line drive he would ever hit in his storied 22-year career.  McCovey would dash out of the box toward first and his place in baseball history.  He had brought a capacity stadium to its feet with a crack of the bat.

The baseball, however, burned deep into the chest-high glove of a perfectly positioned Richardson.  From anticipation to agony... in one fateful second for Giants fandom.  The shared grief was palpable. An elderly lady from her seat in the row directly behind me, leaned forward and we shared a consolatory embrace that remains seared into my scrapbook of tender encounters with perfect strangers.

There are surely such dreams and disappointments that unite us all.  Moments you could never describe on the back of a baseball card. 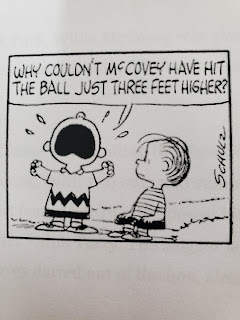 Posted by Harry Cummins at 4:03 PM