In A Game As Good As It Gets, Ducks Reach Final Four Pinnacle 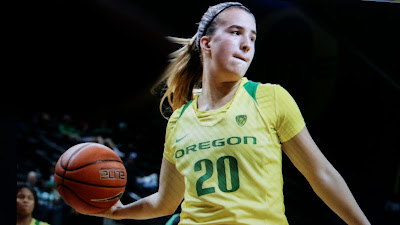 
It's Sabrina Ionescu's world and for one electric Sunday afternoon at Portland's Moda Center I was simply pleased to be a small part of it.

In what was one of the most intriguing and well constructed basketball games I have ever been privy to witness, Ionescu and her Oregon Ducks held off  Teaira McCowan and the Mississippi State Bulldogs 88-84 in the Portland Regional final to advance to their first ever Final Four appearance.  Also, for the first time in three years, the preeminent powerhouse Bulldogs will not be playing in the NCAA Championship game.

This game belonged in a time capsule.  Ionescu, who along with McCowan, is a leading candidate for the National Player of the Year award, scored 31 points, 14 in the final quarter including all five of her final shots from the field.  It was the most points ever tallied by a Lady Duck in an NCAA tournament game.  Her step-back 3 point dagger with 1:13 left in the game could turn out to be the most important shot of the season, supplying the Ducks (33-4) with a 6 point lead in the closing moments.

Ionescu, college basketball's all-time career' triple double' leader in both women's and men's NCAA D-1 history with 18, came close to her signature feat once again Sunday, pulling down 7 rebounds and dishing out 8 assists. Still a junior and just named an AP All-American for the second time, Ionescu must now decide whether to declare for the upcoming WNBA draft or return to Oregon for her senior season. 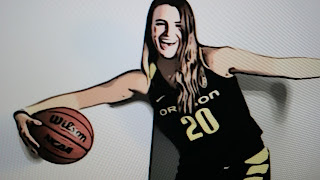 There was far more to this back-and-forth instant classic:

All five Mississippi State starters scored in double figures.  Their 6'7"All-American McCowan had 19 points, 15 rebounds, and 4 blocked shots despite being double and triple teamed the entire contest. Senior guard Jazzmun Holmes handed out 13 assists to go with her 15 points in posting a double-double performance.  The Bulldogs (33-3 )pressure-packed play in front of a hostile Moda Center filled with nearly 12,000 yellow and green clad Oregon supporters, was indeed impressive.

The Ducks,with their rapidly rotating ball movement all afternoon, proved instrumental in creating the spacing needed for their open 3 point looks.  Oregon also out rebounded the Bulldogs, who came into this game ranked 2nd nationally in rebound margin per game.

Satou Sabally, Oregon's athletic 6'4" sophomore from Berlin, Germany, was outstanding, scoring 22 points, to go with 7 rebounds,3 assists and 3 blocked shots.  Ducks forward Ruthy Hebard led a swarming defense responsible for containing McCowan around the basket.  Hebard also broke loose in the 3rd quarter to score 10 of her 14 points in the game, and had a key blocked shot of a McCowan attempt late in the final quarter that sent the crowd into a frenzy.

The Ducks await the winner of a Monday night clash between top ranked Baylor and Iowa to determine their opponent in Tampa, Florida next weekend in the Final Four.

Despite the near flawless performance yesterday by the Ducks, I do have concerns they will not be able to repeat their 50% accuracy from 3 point distance in what will amount to a win or go home contest played on a neutral (Tampa) court.  Of more importance, I doubt  Oregon can count on a repeat of yesterday's "generous" officiating under the basket, where they were allowed to shove and hack Mississippi State's McCowan without reprimand.

If top overall seed Baylor (35-1) should get by Iowa for a Final 4 spot, the Ducks would once again be forced to deploy a unbalanced defensive scheme in an effort to stop a 6'7 post player, Kalani Brown of the Lady Bears.  They must also find a way to deal with Lauren Cox, a 6'4" Jr. who is a difference maker around the basket.  Together, they would present a formidable obstacle for the Lady Ducks.

But in Sabrina's World, as we now know, anything is possible.

Posted by Harry Cummins at 8:58 AM