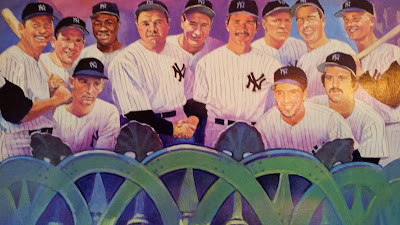 The most storied franchise in baseball history has been bitten by a devastating injury bug!! A bug that seemingly refuses to leave the neighborhood of 161st and River Avenue in the Bronx

With today's announcement that Gary Sanchez, in the midst of a resurgent season, will require a stint on the IL with a strained calf, the all-star catcher now becomes the 12th New York Yankee on the shelf.

With the season barely three weeks old, the Yankees have already lost a major league leading total of 155 days to injury.  These are not role players hitting the disabled list. Nor are some of their injuries insignificant.

If you measure the teams setbacks by the new gold standard of baseball (WAR-Wins Above Replacement) the Yankees have already lost their second, third, fourth, and fifth most productive players from last season.

The list of  injured players reads like an All-Star ballot.  Miguel Andujar, Luis Severino, Dellin Betances, Gary Sanchez, Aaron Hicks, Giancarlo Stanton, Didi Gregorius, Troy Tulowitzki, C.C. Sabathia, Jacoby Ellsbury, to name a few.  There are whispers that the injuries to Severino and Andujar may be season-ending ones.

Manager Aaron Boone remains calm.  But those ghosts out in Monument Valley  ( pictured above) are stirring.

The Yankees will play 3 games against the White Sox this weekend to open a long home stand.  Tonight is Bernie Williams Bobblehead Night at the Stadium.  Fans can only wish that their former sweet swinging outfielder was also in the starting lineup!!