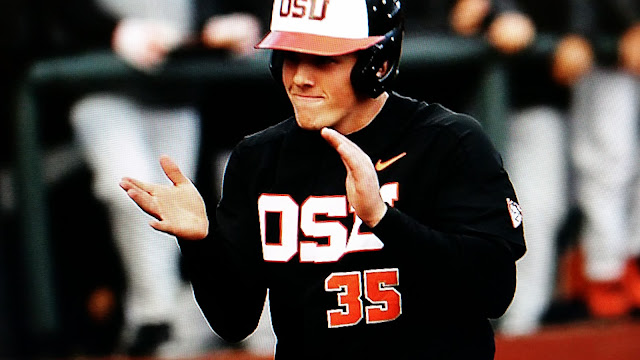 As is our season-long custom here at Craw's Corner, its time for our periodic update on the exploits of switch-hitting Oregon State catcher Adley Rutschman, a lock to be selected Number 1 by the Baltimore Orioles in the upcoming MLB draft.

All of this from a guy who three years ago, as a high school senior, was only 19 picks away from being the last pick of the draft in the 40th and final round.  He was picked 1,197th out of Sherwood High School in Sherwood, Oregon by the Seattle Mariners.

After a freshman season at OSU, where he hit an anemic .234, he turned everything around by batting an amazing .408 last year, finishing the year with a .567 batting average in the College World Series and winning the Most Valuable Player Award.

A complete package as a player, Rutschman has refined his receiving and throwing skills while at Oregon State.  He has a big league arm to match his bat.  Scouts say he typically throws a ball to second base in 1.8-1.9 seconds.  Reports from OSU say he has also been clocked at 96 mph off the mound if he were a pitcher.

In these approaching weeks before the 2019 MLB draft, Adley Rutschman should become a household name in the baseball world.  He joins San Francisco Giants prospect Joey Bart as the two most exciting catching phenoms in recent history.

From 1,197 to No 1 in three short years.  It appears there is still much to be said for a college education.

Posted by Harry Cummins at 4:00 PM