In my Portland Timbers season preview, I alluded to the fact that due to stadium construction not allowing any home games for the first three months of the season may cause a downswing for the team.

I didn't expect it to look this bad.

The Timbers, through the first month of the season, have posted a dismal 0-1-4 record, their only point coming in the opening game against the Colorado Rapids, a 3-3 tie. The first game was also their only prolific scoring output, as they have scored two goals in the last four games. They have also lost by three goals in three of their games, including FC Cincinnati's first MLS win, losing 3-0. This past weekend, they delivered the San Jose Earthquakes their first win of the season as well. a 3-0 loss.

The teams they have scored upon in losses are, at this point of the season, respectable teams to fall to. LAFC and natural rival LA Galaxy are among the top three teams in the western conference to date. The LA Galaxy game was unfortunate, however, as the Galaxy only managed two goals via penalty kicks. It's still very unsettling that the team has not gelled to this point, but it is clear something is missing. Their next chance at a victory will be on Saturday, April 13th in Frisco, Texas against FC Dallas, a top five western conference team.

There's still just barely under two months until the Timbers will arrive home to a raucous crowd of over 30,000 people. Let's hope the fans get to see a team hit rock bottom bouncing back. 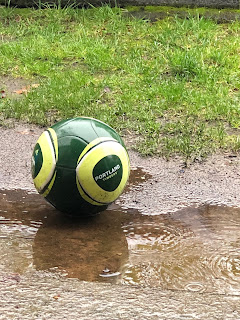 Posted by Steven Weldon at 3:16 PM