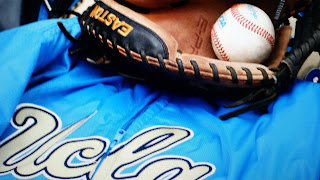 Thanks to a career-high 13 strikeout performance by right-hander Ryan Garcia, the UCLA Bruins swept East Carolina over the weekend, winning their 6th straight game, and remaining Number 1 in the nation in the latest Baseball America college baseball poll.

UCLA (27-6 ,9-3 in Pac-12) went 4-0 for the week, all of their wins coming over nationally ranked opposition.  With Stanford remaining  Number 2 in the poll, and Oregon State moving up to number 5, the Pac-12 now claims 3 of the top 5 spots in the rankings.

The Bruins host Pepperdine (17-14) in a Monday night showdown at Jackie Robinson Stadium and then play host to a 3 game Pac-12 series with Cal starting Thursday.

Garcia was the first Bruin pitcher to post double digit strikeouts in consecutive appearances since Griffin Canning in 2017.  The 13 strikeouts this weekend against East Carolina were the most by a UCLA pitcher in over 5 years.

UPDATE   The Bruins rallied for 3 runs in the bottom of the 7th inning to defeat Pepperdine Monday night 3-2 and increase their longest winning streak of the season to 7 games.
Posted by Harry Cummins at 4:14 PM