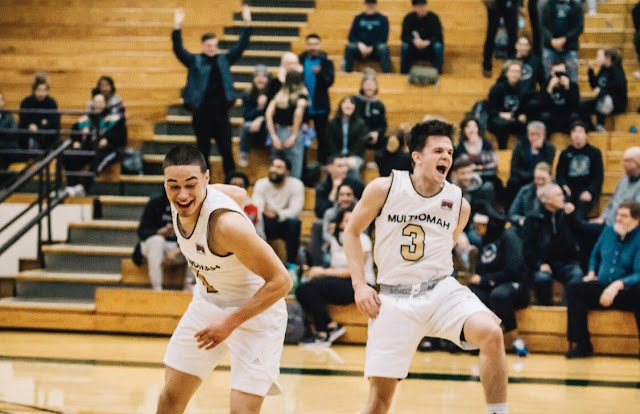 Multnomah guard Justin Martin, the NAIA's leading scorer at 31.9 ppg, posted one of the stratospheric numbers in collegiate basketball history Tuesday night when he connected on a record (15) 3 point baskets enroute to a jaw-dropping 71 point performance in Portland, Oregon.

Martin's final basket came on a running floater with 2 seconds left, giving the Lions of the Cascade Collegiate Conference a pulsating 126-124 upset win over cross town rival Warner Pacific, as students and fans stormed the court in wild celebration of their teams first ever win over a nationally ranked opponent.

Martin, a 5'9" junior, was a sensational 21 of 33 from the field and an unheard of 15 of 19 from 3, moving into 2nd and 3rd place all-time in the NAIA for made 3's in a single game.  His previous game high for 3 point baskets was set only a few weeks ago when he hit 14 against NCAA D-3 Pacific University.  His 71 individual points broke the all-time CCC scoring record and was the NAIA high mark for the season by a whopping 21 points, established last week by Malik Martin of Midland (Neb) who scored 50 points on 20 of 23 shooting.

Multnomah's Martin now has recorded games this season of 44,49, and 71 points!!  The 71 points also fell just one point shy of the all-time NCAA D-l record of 72 points, set in 1991 by Kevin Bradshaw of United States International in a game against Loyola Marymount.  It was also the 2nd highest single game point total in NAIA history, and an all-time NAIA D-2 record.

Martin had 37 points in the 2nd half, and the (8-3) Lions needed all of them to withstand a furious late game charge by the 17th ranked Knights, who trailed 91-66 with 14:12 left in the contest.  Morris Bethea and Khiry Williams led the Warner Pacific's rally with 27 and 21 points on the night,while Collin Malcom registered a double-double with 17 points and 10 rebounds.

At one point Martin was an uncanny 15 of 17 from 3, showcasing his NBA and beyond range with acrobatic slashes to the basket that allowed him to convert 14 of 17 from the free throw line.  As a team, Multnomah hit 19 3's, well short of their historic (38) 3 point baskets in their record setting game against Pacific, an all-time NAIA high.

Martin had plenty of help from his teammates.  Brett Blackstock  had 22 points and provided the key spark for the Lions starting the second half.  Ben Grandle had a double-double with 13 points and 12 rebounds, while 6'6 Stephan Zavydovskyy had 11 rebounds.  National assist leader Briggs Young was held to just 3 assists as the ball was in Martin's hands throughout the game as he buried big shot after big shot that left the crowd in disbelief. A chorus of "how many does he have now" was an overheard refrain throughout the second half.

"Justin is a special kid," said Coach Curt Bickley.  "He told me with 8 minutes to go that he wanted the ball every possession. I agreed!"  To put Martin's performance in further perspective, his 15 3's surpassed the all-time NBA record of 14 set this year by Klay Thompson of the Golden State Warriors.


This was a huge win for Multnomah and their coach, who masterfully manuvered a 7 player lineup to one of the most memorable nights of basketball ever witnessed in the Pacific Northwest.   Justin Martin and tiny Multnomah University, in their fourth year of NAIA play, just sent a big message to the entire basketball world tonight.
Posted by Harry Cummins at 11:25 PM