Aaron Gordon Could Soon Be The Best Player In The NBA! 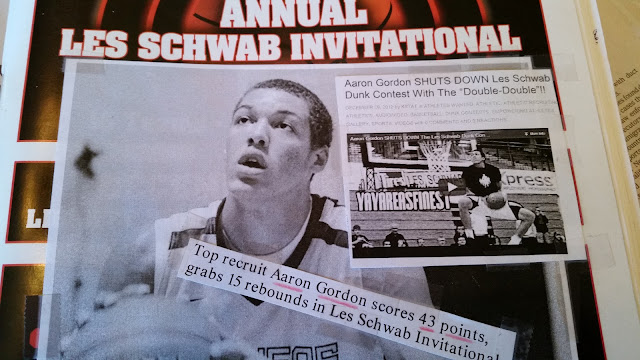 
Having witnessed some of the best basketball talent of the past two decades pass thru Portland by way of the annual Les Schwab Invitational, I still consider Aaron Gordon (2012) of Archbishop Mitty to be the greatest high school player I have ever witnessed at this prestigious holiday tournament.

I saw Gordon play twice in that 2012 tournament.  In the first game, he scored 43 points and had 15 rebounds.  A few days later, he scored 32 points, pulled down 24 rebounds, blocked 5 shots, stole the ball twice, and handed out 3 assists.

In between, he won the Schwab annual dunk contest with an innovative and electrifying "double-double" dunk.

After being drafted as the fourth overall pick in the 2014 NBA draft, the 23 year-old Gordon is now in his fifth year with the Orlando Magic.  Some may remember his epic battle with Zach LeVine in the 2016 NBA Slam Dunk contest that labeled Gordon as the greatest dunk contest loser of all time.

Given his ability to do just about everything on a basketball floor and his work ethic that has him putting up 300 shots a day every summer back in San Jose, here's a prediction not many are making:

The multi-dimensional Aaron Gordon will soon be in the discussion to designate the best player in the NBA!!!