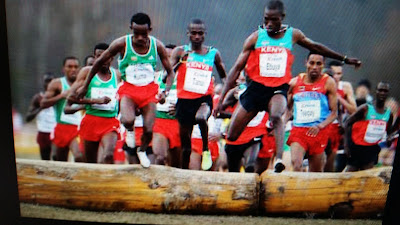 For a sport in need of a major marketing boost, it may receive exactly what it requires this coming Saturday when the elite cross country runners from 67 nations assemble in Aarhus, Denmark for the staging of the 43rd IAAF/Mikkeller World Cross Country Championships.

Instead of idyllic golf course footing, the 2019 Championships will be contested on the obstacle-laden, roller-coaster grounds of the Moesgaard Musueum, barely a mile from the Bay of Aarhus on the east coast of Denmark's Jutland Peninsula.  This promises to be unlike any previous Championship course in both design and degree of difficulty.

The spectacular course is tough right from the gun, as runners will climb 100 feet in just the opening 400 meters of the 10,000 meter test.  Then it really gets interesting.

Athletes will actually race up the grassy slope of the Moesgaard Museum that serves as the ROOF of the building and will encounter a 200 meter course circling the top of the Musuem and then back down.  There will be special extreme challenge zones scattered throughout the course filled with mud and sand and a expansive water splash area filled with 6 inches of water.

The challenging course will also traverse thru single tract forests, and over slick grassy knolls and gravel roads.  For thirsty spectators, the highlight of the day will occur when runners enter the 'Valhalla', a massive 50x20 feet tent and cheering zone where fans are encouraged to drink beverages provided by the race's sponser, Mikkeller, a Danish microbrewery.

As anyone who has competed in cross country will attest, this sort of insane course design will destroy the very elite who depend on rhythm to best utilize their talents.  One race official thus sees this course as a "equalizer", giving athletes from outside east Africa a chance to be competitive.

In the Men's race, favorites include:

In the Women's Field, Hellen Obiri, Beatrice Chepkoech and Letesenbet Gidey are expected to contend for the top spot.  Obiri will be making her World XC debut. On the American side, U.S. Cross Country champion Shelby Houlihan declined her spot to Aarhus.  The Bowerman trained United States trio of Marielle Hall, Courtney Frerichs and Karissa Schweizer may be overmatched as each is making their first appearance in a World XC.

No American has won the World XC since Craig Virgin in 1981.  None has medaled since Alberto Salazar in 1982.  The top American runner in the men's field is 30 year old Shadrack Kipchirchir.

Organizers are expecting a crowd in excess of 5,000 spectators for race day festivities, which will include various mass participation races that will showcase IAAF President Seb Coe and Frederick, the Crown Prince of Denmark.

Short of being in the 'Valhalla' in person Saturday morning, I will toast the organizers of this ground breaking, eclectic event with a coffee and...a Danish!!!  It promises to be quite a show!