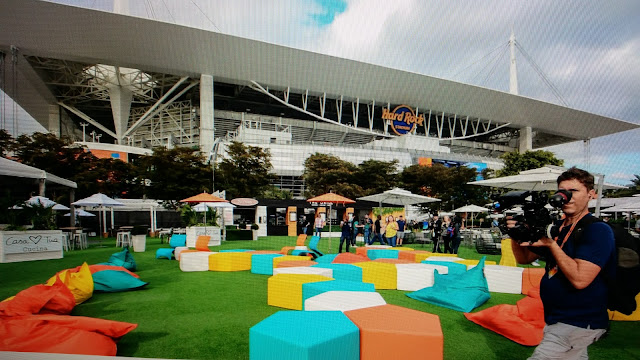 "Don't you know about the new fashion honey?
All you need are looks and a whole lot of money
It's the next phase, new wave, dance craze anyways."

Gone is the scenic water-view drive over the Rickenbacker Causeway to Key Biscayne.  Instead, say hello to parking lot palm trees priced at $35,000 each, Ferrari leather cushioned seats, and Picasso paintings that can be purchased for a cool million.

The relocated Miami Open tennis tournament that begins a 12-day run today (weather permitting) in the home of the Miami Dolphins of the N.F.L. is part art deco, part rock 'n roll!!!

Stephen M. Ross, the billionaire real estate developer who purchased the Miami Dolphins in 2008 and then spent $550 million renovating the stadium, has just dropped another $72 million to transform Hard Rock Stadium into a state-of-the-art tennis facility.

Ross stepped in to rescue the Miami Open when organizers found themselves in a battle with a Key Biscayne resident who controlled the land where this tournament had been held for the last 32 years.  Ross is also the key figure in the development of the futuristic Hudson Yards Project on the west side of Manhattan that has recently transformed the skyline of New York City.

At the new site of the Miami Open, just 20 miles northwest of Key Biscayne, a main court painted in 'Oasis Blue' was installed on the football field.  A 5,000 seat grandstand court, two other show courts, and eight additional match courts were built on top of parking lots surrounding the stadium.  There is also 18 additional practice courts available to the players on-site.

Many of the stadium's 13,800 seats feature lounge-like seating equipped with individual television screens.  These seats go for $50,000 to $70,000 for the two week tournament that will feature the top players in the world from both the WTA and ATP tours.

Premium-seat suite packages sold out two months before the start of the event and feature private dining rooms.  For the elite 1,000, there is a private entrance to the stadium from a private parking lot, in which patrons pass through a tent lined with original art works for sale from the likes of Andy Warhol and Pablo Picasso

This will not just be a luxury experience for the well-healed spectator.  The top eight seeds in the men's and women's singles draw, as well as all former champions, will be given private suites to be used by their entourages.

Just as the recently concluded PNB Paribas Open in Indian Wells is directed by a former player (Tommy Haas), so to is the Miami Open.  James Blake, Miami tournament director, admits, "There is a bit of a challenge in giving people the confidence that this really is for the best."

Spectators seeking traditional ball-park fare and pricing at the Miami Open, may be in for a surprise this week as well. Here is a sample of what's on the menu around the grounds:  Seared yellow-tail snapper with curry confit; Rosemary steakhouse tenderloin with horseradish aioli, petite arugula and pan de queso; Watermelon tomatillo salad; crispy pork belly chunks glazed with quara barbeque sauce.   Well..you get the idea.

Welcome to the new face of tennis!