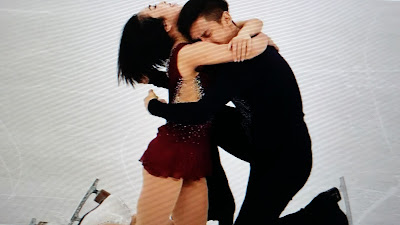 2018 Olympic Silver Medalists,Wenjing Sui and Cong Han, skating together since childhood, brought a packed house in Saitama, Japan to its collective feet today with one of the most lyrical performance ever witnessed in international competition, in capturing the pairs gold medal at the 2019 World Figure Skating Championships.

Their breathtaking free routine resulted in a season best 155.60 points (234.84 combined) en route to the pair's second world championship following  their world title in 2017.  The Chinese pair had only recently returned to major international competition a month ago due to Sui's lingering foot injury.

Skating last in the order, and sitting in second place behind the great Russian pair of Yevgenia Tarosova and Vladimir Morozov, Sui and Han showed why figure skating can be the most watchable sport in the world for its athleticism, artistry, and passion.

To this veteran reporter who has covered other World Championships, this performance by Sui and Han was perhaps the most powerful ever witnessed, as they skated to the hypnotic 'Rain In Your Black Eyes' by Ezio Bosso.

Find it on You Tube.  It may just move you more than any One Shinning Moment will from this week's March Madness.