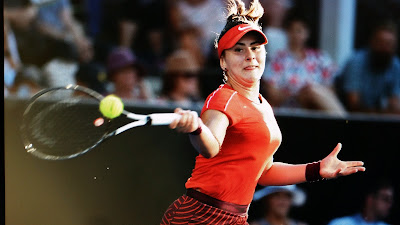 After her improbable wildcard romp to the BNP Parabas Open crown last week, Canadian teenage sensation Bianca Andreescu found herself down a set, and trailing 5-1 in the second set today, in her opening round match of the Miami Open.

Across the net was Irina Camelia Begu of Romania, the same player she beat last week in her opening match at Indian Wells.

That's when the 18 year old Cinderella of the tennis world went to work.  Fending off match-point, winning 5 straight games and then a tie-breaker, Andreescu forced the match to a third and deciding set, which she dominated.  She now advances to the second round of the Miami Open with the 4-6,7-6,6-2 win.

It's only March, but Andreescu already has compiled a 29-3 record in matches so far this year and has moved into a Top 25 ranking in the world.  She is now scheduled to meet Sofia Kenin in the next round, the 20 year-old former prodigy who has enjoyed a metoeric rise of her own.  (see Craw's Corner  January 11 this year for Sofia's story)

It should be a great match-up of two rising stars in women's tennis, both with devastating drop shots in their arsenal.

From toiling in obscurity last year, to her astonishing breakthrough at Indian Wells, Bianca Andreescu has become the toast of the tennis world.

Posted by Harry Cummins at 4:01 PM