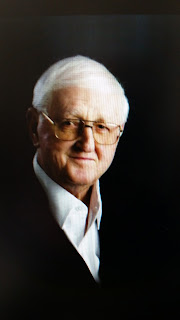 
Dan Jenkins, a writer with Sports Illustrated for 25 years, died this week at the age of 89 in Ft. Worth, Texas.  Like many of you, for two decades I eagerly awaited his byline on my doorstep.

I especially favored his musings on the sport of golf.  He was elected in 2012 into Golf's Hall of Fame and remarked at the time "I am the first to be taken in as a vertical person."

In celebration of his life, here is a small example from the pages of SI, reflecting Jenkins biting sense of humor that always brought perspective to the world of fun and games, especially to the sport of golf:


"The devoted golfer is an anguished soul who has learned about putting just the way an avalanche victim has learned about snow.  He has used straight shafts, curved shafts, dull shafts, glass shafts, oak shafts, and Great Uncle Clyde's World War 1 saber, which he found in the attic."


Maybe we all should head for the attic in search of those collector editions of Sports Illustrated. Those by-gone issues filled with the phrase-turning examples of genuine story-telling with a Jenkins flare.

I wasn't as comfortable with some of Jenkins efforts outside of magazine journalism, such as the 1972 novel Semi-Tough.  But I remain a staunch admirer of his home-spun way with words and his ability to poke at some of society's sacred cows.

For a closer look at the life of Dan Jenkins, pick up a copy of his 2014 book "His Ownself- A Semi Memoir"