Born To Run, Not Die. 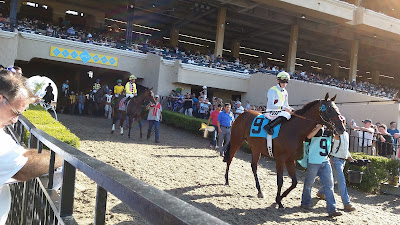 
Some very disturbing news filtering from the shadows of the San Gabriel Mountains in Southern California this past week.

Just days before the running of the famed Santa Anita Handicap, once won by the immortal Seabiscuit in 1940, this thoroughbred race track has been temporarily shut down in the wake of the mysterious deaths of 21 horses here since Dec 26.

The move comes as horsemen prepare to groom their best stock for a run at the Kentucky Derby in May, with the Santa Anita Handicap being one of the biggest prep races of the season.  All training on the track has also been banned until at least Sunday, as experts have been called in to access the situation.

Of the 21 fatalities since Santa Anita's winter meeting began the day after Christmas, seven have died as a result of racing on the main track, five on the turf course, and nine during morning workouts.

The abnormal amount of rain that has fallen in Southern California this winter is considered a likely factor in explaining difficulties with the track.  "These are thousand-pound animals going close to 40 miles per hour," Rick Arthur, medical director of the CHRB, said recently.  "So if you don't have a consistent surface, it can be hazardous."

The practice of "sealing" a racetrack after heavy rains so that water cannot penetrate its surface, often creates concrete like footing, sometimes spelling disaster for the horses, claim some.  Others assert that a "sealed" track is generally safer, which makes the problems at Santa Anita all the more confounding.

Still others cite trainers and veterinarians for the problem, as horses are often given anti-inflammatories, painkillers, sedatives, and more to keep them running when they should be recuperating.   Animal rights activists have been protesting outside the race track in recent days and have asked the Los Angeles County district attorney to open an investigation into the use of drugs that mask injuries in horse racing.

To make matters worst, recent policies at the track have been put in place to encourage trainers and owners to run their horses more often to ensure bigger fields as a way to attract more betting.

All of this seems to circle back to that old adage of "Follow The Money".

A thoroughbred horse in full-flight can be such a beautiful thing to behold.  I will always remember a Sunday morning  in the summer of 2015 when I rose before dawn to watch a 7 a.m. workout of Triple Crown winner American Pharoah at a deserted Del Mar racetrack north of San Diego. It was one of the greatest 'sporting events' I have ever witnessed.

After the workout, Pharoah's trainer Bob Baffert said "He went nice, like he always does.  I think this empty track today allowed him to relax some.  When he's got horses all around him, he gets all keyed up."

Speaking for myself, I would have gladly paid an admission price to watch that, or any other, early morning workout.  Sadly, my personal aesthetic matters little when it comes to supporting an entire industry based on pari-mutuel gambling.

There is an old saying among horse-players in Southern California that goes  'Anita takes away everything Santa gave you,' in reference to the racing season that always begins the day after Christmas at the foot of those majestic mountains.

In light of recent developments, it appears that 'Anita is taking away far more than that!!

Posted by Harry Cummins at 7:40 AM