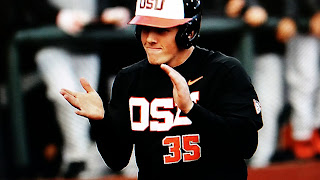 Adley Rutschman belted his 6th home run of the young season, supplying all the runs the Oregon State Beavers (11-1) needed to get by the University of Minnesota 2-1 Friday, in the opening game of the Seattle Baseball Showcase.

Trailing 1-0,  Rutschman's 6th inning 2-run shot to right field in the home of the Seattle Mariners, gave the Beavers their only runs of the contest.

As a note of interest to Seattle baseball fans, former Mariner catcher Dan Wilson's son, Eli Wilson, batted clean-up for Minnesota, going 1 for 4 while stealing a base.  Eli is in his junior season with the Gophers.

Oregon State meets Indiana Saturday in Day 2 of the Showcase, and concludes play Sunday against powerhouse Coastal Carolina, a televised game on the  Pac 12 network.

Rutschman is now batting .368 on the season after a dozen games.