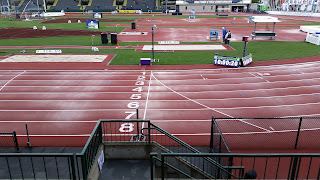 
Ethiopian Yomif Kejelcha will make a final attempt this indoor season to take down, not one, but TWO, world records in the same race this Sunday at Boston University's fast indoor track following the conclusion of the IC4A/ECAC Indoor Championships.

The special race will be known as the Bruce Lehane Invitational Mile, and according to Kejelcha's coach, Alberto Salazar, will be an attempt to break both the 1500 meter and mile world indoor records in the same race.  Salazar said Kejelcha will be going for a 1500m WR and then hopes to maintain his clip another 109 meters to establish the mile world record as well.

Both marks have barely eluded Kejelcha so far in 2019. At the Millrose Games in New York City  last month, he ran 3:48.46, missing by a mere hundredth of a second the 22 year old indoor mile world record of Hicham El Guerrouj.

The world record in the 1500 meters was broken last month by Ethiopian Samuel Tefera, who clocked 3:31.04 to break El Guerrouj's previous mark of 3:31.18.  Fans of the Prefontaine Classic in Eugene, Oregon will remember the 18 year-old Tefera from his 2nd place finish to Timothy Cheruiyot in last year's dramatic Bowerman Mile.

Eric Sowinski, an 800 meter specialist, has been enlisted as the all-important pace-setter for Kejelcha's world record attempt.  The plan is for Sowinski to run the first 200 meters in 28.0 seconds and run as evenly as possible from that point to hit the 800 meter mark in 1:52.

The race Sunday will have a strange twist, as the rest of the assembled field  will be following a second pacemaker, in order to hit the IAAF World Championship "A" standard of 3:53.10 for the mile. The "second pack" of runners will include Craig Engels, Henry Wynne, and Johnny Gregorek. The IAAF "A" standard for 1500 meters is 3:36

The world record attempt will  begin at 4 pm (EST) Sunday.  Kejelcha is part of a sizable stable of elite runners representing the Nike Oregon Project in Portland, Oregon, half of them coached by Salazar, and the other half by Pete Julian.

Posted by Harry Cummins at 2:49 PM