Tennis Lovers Rejoice, This Tournament Is As Good As It Gets!!!! 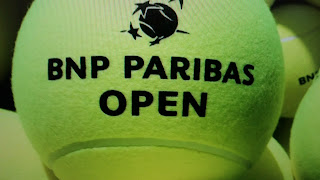 
To those truest of tennis devotees out there, you already know the unmitigated allure of the annual BNP Paribas Open about to commence this week in a nirvana known as Indian Wells, about a half-hour drive south of Palm Springs, California.

For the rest of you, those who think they might like to witness performance and excitement equal to any Grand-Slam event, while relishing the warm, winter beauty of a desert oasis, world class tennis facilities, on-grounds gourmet dinning, and a chance to see the best players in the sport up close.......the next two weeks are simply as good as it gets!!

With the San Bernardino Mountains to the east, the Santa Rosa Mountains to the west, this 54-acre play-land known as the Indian Wells Tennis Center will play host this week to no less than 10 former BNP champions in the field, and nearly all of the top 75 ranked singles players in the world on both the ATP and WTA tours. The finals will be contested in the 2nd largest tennis stadium (16,000) in the world.

Here is a quick look at both the women's and men's fields in what insiders already know is the unofficial 5th 'Slam every season.

Tips   If you go, plan to attend the many matches on the outer courts during the first week of play.  It is the best chance to see most of the up and coming young stars of the sport as you move from court to court. Watch a set here, another there.

Or you could just hang out at your hotel pool all day, until the mountains make for an early sunset and perhaps the best time of day to watch tennis and stroll the grounds.

If you want to get a vicarious view of the action this year from Indian Wells, tune to the Tennis Channel for complete coverage every day.  Sunscreen not required!!