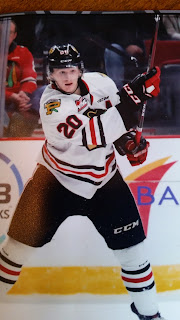 San Jose Sharks prospect Joachim Blichfeld of the Portland Winterhawks is just a few games away from claiming the most prestigious scoring award in all of Junior Hockey, that of top scorer in the combined Canadian Hockey League.

With a pair of assists last night in a 4-1 WHL win over the Everett Silvertips, Blichfeld now has 53 goals and 59 assists in 66 games (112 points).  He enjoys a narrow 4 point lead over Morgan Frost of the Sault Ste. Marie Greyhounds (Ontario Hockey League) and Peter Abbandonato of the Rouyn-Noranda Huskies (Quebec Major Junior Hockey League). Both have 108 points.

A handful of other players are also within reach of the coveted scoring title as all 3 leagues that comprise the 60 team CHL wrap up their 68 game regular season this coming weekend.

Blichfeld, the six-foot-one 190 lb winger, would be the second Danish born skater to win the WHL scoring title after Oliver Bjorkstrand accomplished the feat in 2015, also with Portland.

The last Portland Winterhawk to capture the CHL overall scoring title was Brendan Leipsic in 2013, as he tallied 120 points in the 68 game season.  This was the same season that featured Nathan MacKinnon of the Halifax Mooseheads.

Although Blichfeld did not score a goal in the Tuesday night win over Everett, he peppered the net with half a dozen hard shots that were turned away by Silvertips stellar net-minder Dustin Wolf. Included was a sensational stop on a late second period breakaway rush from center ice by Blichfeld.

The Winterhawks second leading scorer on the season, Cody Glass, did not play Tuesday night due to an injury.  Glass, with 69 points in just 38 games, is expected back in time for Winterhawks post-season action and is projected to be one of the top rookies next season in the NHL for the Vegas Golden Knights.

In the past decade, the Canadian Hockey League has produced some of the NHL's top talent.  Recent CHL graduates include Taylor Hall, Connor McDavid, and John Tavares.  Last year's CHL overall scoring champions was Jayden Halbgewachs of the Moose Jaw Warriors, with his WHL overage season culminating in 70 goals and 129 points in 72 games.