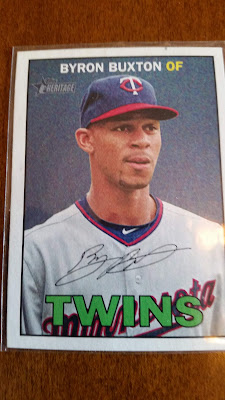 Buxton will be baseball's most exciting player in 2019
and The Minnesota Twins its most watchable team.

With Spring Training concluding and Opening Day at hand, it's time to make a bold prediction as to which team is most likely to surprise the soothsayers this season in Major League Baseball.  Our selection resides in the Central Division of the American League.  It's the Minnesota Twins!

The Twins should battle all season long with the pitching rich Cleveland Indians for the division crown, paced by breakout seasons from their German-born RF Max Kepler and enigmatic CF Byron Buxton.

Minnesota's everyday lineup is solid from top to bottom and should receive elevated performances from talented players like Eddie Rosario,Jonathan Schoop,C.J. Cron and former Seattle Mariner Nelson Cruz.  Miguel Sano, when finally healthy, could provide power in the middle of the batting order and Jorge Polanco should enjoy a full season after his steroid suspension last year cost him half a year of playing time.

The Twins pitching staff should come of age this year, behind first time All-Star Jose Berrios along with Michael Pineda, healthy after Tommy John surgery in 2017.  Martin Perez will be a pleasant surprise in the rotation.

The farm system is loaded, with uber-prospects Royce Lewis and Alex Kiriloff close to major league ready and ex-Oregon State Beaver Trevor Larnach a projected 'fast mover' after the Twins drafted him with the 20th overall pick last year.

The task of interlocking all these pieces falls to rookie manager Rocco Baldelli, hired away from the Tampa Bay Rays to replace first ballot Hall-of-Famer Paul Molitor as skipper.  Baldelli, at age 37, becomes the youngest current MLB manager.

Add it all together, and you have baseball's most surprising team of 2019.  Might we see October baseball in the Twin Cities?

Posted by Harry Cummins at 7:12 PM