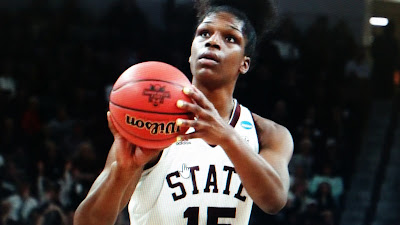 
Most of the crowd pouring into the Moda Center tonight in Portland for the NCAA women's basketball tournament will be rooting for the Oregon Ducks (31-4) and their super-star Sabrina Ionescu, who holds the NCAA record with 18 career triple-doubles, as they match up with South Dakota State in a late game Sweet 16 clash.

However, if fans want to catch a glimpse of the best women's player in college basketball and the probable No 1 pick in the upcoming WNBA draft, they should not miss the early game between Mississippi State and Arizona State, slated for a 6 pm tip.

This is where you will find Mississippi State's 6'7 center Teaira McCowan, as the Bulldogs (32-2) attempt to make the Final Four for the third year in a row, having lost in the national championship game the past two seasons.

McCowan is the SEC player of the year, averaging 18.3 ppg and 13.5 rebounds.  She has registered an amazing 29 double-doubles this season, often sitting out the 4th quarter of games because her team was so far ahead.

Baring an upset, Mississippi State and Oregon appear headed for a Sunday showdown in the Portland Regional for the right to advance to the Final Four.

Nearly 12,000 seats have been sold in anticipation.